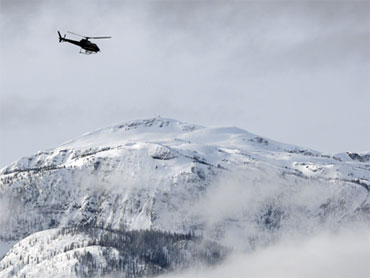 An avalanche that killed at least two people at an informal snowmobile rally in Canada's Rocky Mountains may have been triggered by three daredevil sledders who apparently unleashed a deadly wall of snow on up to 200 people below, witnesses said Sunday.

The Royal Canadian Mounted Police said an even worse tragedy may have been averted because many of the snowmobilers had come equipped with avalanche recovery equipment and dug people out even before rescuers arrived at the scene.

RCMP Cpl. Dan Moskaluk told a news conference Sunday that two men are confirmed dead, not three as reported earlier in the chaotic hours after the slide. Moskaluk said they've managed to find almost everyone who registered for the event and most got off the mountain safely.

Moskaluk said the avalanche was "human triggered" and said all aspects of the incident and the deaths will be investigated by police and the coroner's office.

He did not say there will be no more bodies found, but he said RCMP have not had any further reports of people who remain missing and they believe they have an accurate list of participants. The slide struck around 3:30 p.m. Saturday on Boulder Mountain.

He said 30 people were injured, including one person in critical condition and three others in serious condition who were taken to regional hospitals. Nineteen people were treated and released at the local hospital.

Despite avalanche warnings, about 200 people had gathered on the mountain for the Big Iron Shoot Out, an annual unsanctioned event known for its party atmosphere and stunt riding that has become popular among people who enjoy snowmobiling in the deep snow of back country British Columbia.

Two men who witnessed the avalanche said it hit so many people in part because a crowd had stopped at the bottom of the mountain to watch three snowmobilers perform a stunt known as high-marking - a contest to see who can race up a slope and leave the highest mark.

Steve Langevin, 38, said he thought the crowd was safe from "those crazy guys" because the snowmobilers seemed like they were miles away, but the wave of snow was so massive it easily reached them.

His friend, Pierre Beaudoin, 48, said he thought the accident could have been prevented if people hadn't been irresponsibly high-marking in avalanche-prone conditions.

"The minute one makes it to the top, oh, the next guy, I could do it, and then it becomes stupid. And it was stupid, they were starting to come from the side, one's coming down and one's going up," he said. "Then everything started going crazy."

Revelstoke Mayor David Raven said an avalanche warning had been in place for three weeks.

"A fresh snowfall overnight exacerbated that warning. I know people have been cautioned again and again," Raven told CTV Newsnet.

Moskaluk said police lacked the authority to shut off public access to sites in the area like Boulder Mountain even if avalanche warnings were in effect.

"People need to risk assess their leisure activities," Moskaluk said. "It appears a number of the people that were participating (in the rally) were able to self-rescue prior to emergency services arriving."

The avalanche occurred near Revelstoke, about 300 kilometers (185 miles) west of Calgary and about 400 kilometers (250 miles) northeast of Vancouver.

A full-scale ground search resumed on Sunday after rescuers sent helicopters over remote Boulder Mountain at daybreak Sunday to determine if conditions were safe. Operations were halted overnight due to darkness.

Police also conducted a door-to-door search of hotel rooms Sunday to piece together how many people were missing. Moskaluk said the hotel room canvass left police more optimistic that the death toll would not rise significantly.

"Certainly we're in a better position today than we were yesterday," Moskaluk said in a telephone interview with The Associated Press. "This site will not be stood down until they are ... 100 percent confident that there's nobody remaining buried."

George Hall, who came up from Montana for the the event, turned and wrapped his ams around his 13-year-old son in the seconds before the avalanche swept over them. The two tumbled together down the side of Boulder Mountain.

Hall was knocked unconscious, coming to as rescuers frantically dug him free to see his son was still by his side.

His son, also named George, said he saw stars floating in front of his eyes as the raging snow tore their bags, gloves and helmets from their bodies.

Hall Sr. was left with a huge gash in the back of his head, while his son was banged and bruised but otherwise OK.

"There were a bunch of sleds on top of us, but somebody dug us out," he said, his voice unsteady.

"I owe somebody my life for it."

The man he identified only as Shay was slightly higher up the mountain when another sledder zipped around him, darting up the mountain and setting off the first cascade that grew larger and larger as it rushed toward the others below.

Hall said he was blue and cold by the time his fellow riders were able to dig him free from under the snow.

Hall said it was difficult facing his wife after insisting again and again that their young son was safe with him while they were both out on the snow.

But the experience won't dampen his enthusiasm for the sport.

"I have no regrets at all," he said. "When you're extreme riders it happens to all of us."

Ervin McKeen, 62, of Nanton, Alberta, was nearby when the snow came down and tossed snowmobiles around everywhere. He said one man was screaming "Where's my son?" as he desperately searched the area.

McKeen, an experienced backcountry user, said he used his equipment to lead survivors with shovels to places in the snow where electronic avalanche beacon signals indicated people might be buried.

The Canadian Avalanche Center had issued a warning of a "considerable" risk for avalanches in the region over the weekend after a powerful storm blanketed the area with snow.

Adam Burke, 20, a member of the Revelstoke Snowmobile Club, said he chose not to go to the rally because of the dangerous conditions in the mountains.

Burke said the Big Mountain Shoot Out was started by a Calgary businessman several years ago, and got bigger over the years. It has a reputation for having a party atmosphere, with many riders and onlookers gathering to watch riders perform high-marking and other stunts,

There have been a few avalanche deaths in the British Columbia backcountry this season but nothing compared to last winter, when there were two dozen deaths. There were 13 avalanche deaths the previous winter.