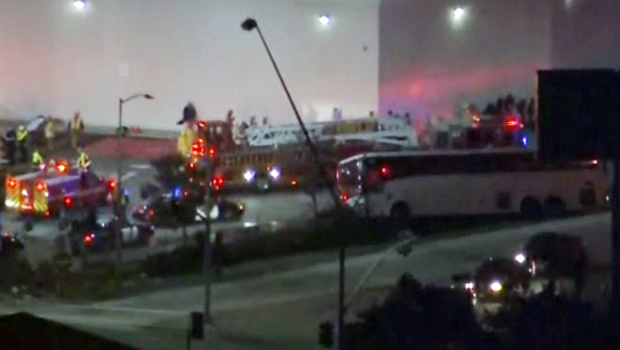 BALDWIN PARK, Calif. - More than 30 passengers were briefly trapped inside a tour bus early Monday morning after the driver lost control while on a Southland freeway.

The accident happened around 4:37 a.m. near the westbound 10 Freeway and Baldwin Park Boulevard offramp, according to the California Highway Patrol.

“The bus tried to get on the ramp to exit, but he come too fast. He can’t control the bus,” passenger Eduardo Magana told CBS Station KCBS.

The bus’ door became blocked in the accident after the vehicle took out a fence, locking 38 passengers and the driver inside, officials said.

They were later freed by rescue personnel.

The bus was traveling from the Fantasy Springs Resort Casino in Indio to Eagle Rock and Panorama City, officials said.

Authorities have yet to determine what caused the crash or why the bus driver lost control.