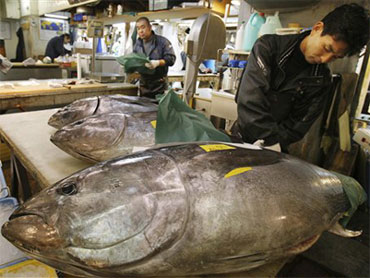 A U.S.-backed proposal to ban the export of Atlantic bluefin tuna prized in sushi was rejected Thursday by a U.N. wildlife meeting, with scores of developing nations joining Japan in opposing a measure they feared would devastate fishing economies.

It was a stunning setback for conservationists who had hoped the 175-nation Convention on International Trade in Endangered Species, or CITES, would give the iconic fish a lifeline. They joined the proposal's sponsor Monaco in arguing that extreme measures were necessary because the stocks have fallen by 75 per cent due to widespread overfishing.

"Let's take science and throw it out the door," said Susan Lieberman, director of international policy with the Pew Environment Group in Washington. "It's pretty irresponsible of the governments to hear the science and ignore the science. Clearly, there was pressure from the fishing interests. The fish is too valuable for its own good."

As the debate opened, Monaco painted a dire picture for a once-abundant species that roams across vast stretched of the Atlantic Ocean and can grow to as big as 1,500 pounds.

It has been done in by the growing demand for raw tuna for traditional dishes such as sushi and sashimi. The bluefin variety - called "hon-maguro" in Japan - is particularly prized with a 440-pound Pacific bluefin tuna fetching a record $220,000 last year.

"This exploitation is no longer exploitation by traditional fishing people to meet regional needs," Monaco's Patrick Van Klaveren told delegates. "Industrial fishing of species is having a severe effect on numbers of this species and its capacity to recover. We are facing a real ecosystem collapse."

But it became clear that the proposal had little support. Only the United States, Norway and Kenya supported the proposal outright. The European Union asked that implementation be delayed until May 2011 to give authorities time to respond to concerns about overfishing.

Fishing nations from Africa, Asia, Latin America and the Caribbean complained any ban would damage their fishing communities and that fears of the stock's collapse were overstated. Libya, in a rambling defence of its position, went so far as accusing Monaco of lying and trying to mislead the delegates before calling for the snap vote.

Japan, which imports 80 per cent of Atlantic bluefin and has led the opposition to the ban, acknowledged stocks were in trouble but echoed a growing consensus at the meeting that CITES should have no role in regulating tuna and other marine species. It expressed willingness to accept lower quotas for bluefin tuna but wanted those to come from the International Commission for the Conservation of Atlantic Tunas, or ICCAT, which currently regulates the trade.

"Japan is very much concerned about the status of Atlantic bluefin tuna and Japan has been working so hard for many years to ensure recovery," Masanori Miyahara, chief counsellor of the Fisheries Agency of Japan, told delegates. "But our position is very simple. Let us do this job in ICCAT, not in CITES. This position is shared by majority of Asian nations."

Afterward, Miyahara welcomed the decision but admitted the pressure would be on his country and others who depend on the Atlantic bluefin to abide by ICCAT. It ruled in November to reduce its quota from 22,000 tons to 13,500 tons for this year. The body has also vowed to rebuild the stock by 2022, which could include closing some fisheries if necessary.

"I feel more responsibly to work for the recovery of the species," Miyahara said. "So it's kind of a heavy decision for Japan too. The commitment is much heavier than before."

But the European Union's Gael de Rotalier said the vote set a worrying precedent and showed there was widespread mistrust about giving CITES any role in marine issues.

That could bode ill for several other proposals still pending, including several regulating the trade in sharks and one dealing with red and pink corals. If that would occur, a meeting that was expected to boost the protection of marine species wood be seen by many environmentalists as a failure.

"We were expecting to have a real debate but it was not possible," de Rotalier said. "There was a strong feeling in the room against any involvement of CITES in marine issues. They were making it a matter of principle and not looking at the merits of the case."

The tuna defeat came hours after delegates rejected a U.S. proposal to ban the international sale of polar bear skins and parts, suggesting that economic interests at this meeting were trumping conservation.

The Americans argued that the sale of polar bears skins is compounding the loss of the animals' sea ice habitat due to climate change. There are projections that the bear's numbers, which are estimated at 20,000 to 25,000, could decline by two-thirds due by 2050 due to habitat loss in the Arctic.

But Canada, Greenland and several indigenous communities argued the trade had little impact on the white bears' population and would adversely affect their economies.