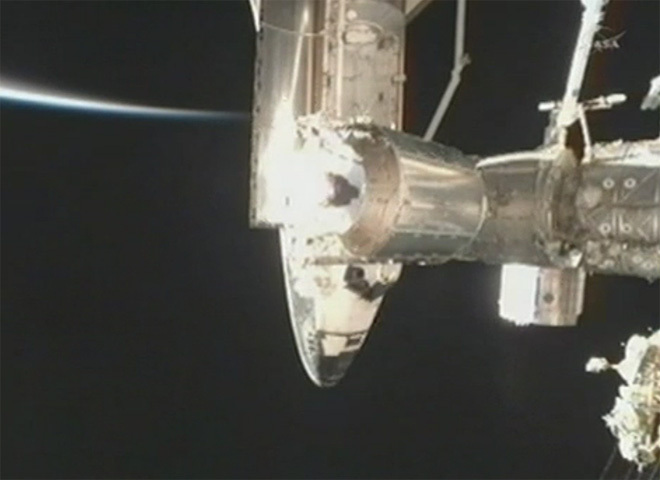 Bringing more than five tons of supplies and equipment, the shuttle Atlantis caught up with the International Space Station Sunday, pausing 600 feet below the lab complex for a spectacular back-flip maneuver as the two spacecraft sailed high above the North Atlantic Ocean, exposing the shuttle's heat shield to cameras on the station, before pressing ahead for final approach and docking.

Aboard the space station, cosmonaut Sergei Volkov photographed the shuttle's heat shield with a 1,000-mm telephoto lens, capturing details as small as one inch across, while Michael Fossum and Satoshi Furukawa "shot" the spaceplane with 800-mm and 400-mm lenses respectively.

The dramatic rendezvous pitch maneuver is a standard post-Columbia procedure to help analysts make sure the shuttle's heat shield came through launch in good shape and is up to the rigors of re-entry. The RPM imagery will be combined with ascent photography and radar data, along with readings from impact sensors and the results of laser scans of Atlantis' nose cap and wing leading edge panels that were collected Saturday to provide a detailed assessment of the heat shield before Atlantis is cleared for return to Earth.

With the rendezvous pitch maneuver complete, Ferguson guided Atlantis up to a point about 350 feet directly in front of the space station with the shuttle's nose pointed toward deep space and payload bay docking module pointed toward the lab's forward port, before Commander Chris Ferguson guided Atlantis to her final approach and docking with the ISS.

"With a reduced crew (of four), the deployment of the crew in the cockpit will be a little bit different," said shuttle Flight Director Kwatsi Alibaruho. "But they've been able to get a good flow and we've rehearsed this rendezvous scenario several times with the crew and we are excited to engage in this final rendezvous with the International Space Station. It'll be a great day, and I think we'll get some great imagery of the shuttle on its final approach."

"This is the 37th flight of a shuttle to the space station, and the first flight was back in 1998 when Endeavour delivered the first U.S. element and attached it to the first Russian element that had been launched," said station Flight Director Chris Edelen. "So here we are 13 years later, the space station is now over 900,000 pounds, it's bigger than a football field from end to end, it's home to a multi-national crew of six doing cutting edge research in biology and medical science, astronomy, physics, fluid and materials science.

But keeping the station supplied after the shuttle fleet is retired will be a major challenge for NASA and its international partners. Two companies, SpaceX and Orbital Sciences, are building unmanned cargo ships to take over U.S. logistics deliveries after a series of test flights late this year and early in 2012.

Atlantis' mission was added to the shuttle manifest earlier this year to deliver a final load of supplies and equipment as a hedge against problems that might delay the commercial cargo ships. The supplies and equipment delivered by Atlantis, along with provisions delivered by unmanned European, Japanese and Russian cargo ships, will support normal station operations through 2012.

"The main purpose of STS-135 is logistics, bringing up supplies to provision the space station through 2012," Edelen said. "That's a key date because our commercial cargo providers are going to be coming on line in early 2012 and by providing the supplies we need to get through all of next year that will provide a little bit of breathing room as those companies enter the challenging flight test phase."

After a brief post-docking safety briefing, the combined crews will get to work transferring equipment from the shuttle to the station and using the lab's robot arm to pull Atlantis' heat shield inspection boom out of the cargo bay so it can be handed off to the shuttle's arm. The boom is being moved to provide extra clearance when Atlantis' main payload, an Italian-built cargo module, is pulled from the bay Monday and attached to the forward Harmony module's Earth-facing port for unloading.

Atlantis has chalked up a near-flawless performance during its 33rd and final mission. But around 6 a.m., one of the shuttle's four general purpose computers -- GPC-3 -- inadvertently shut itself down during a "wakeup" procedure, and flight controllers told the crew to press ahead without it. As it turns out, GPC-3 experienced a similar shutdown during a 2008 flight.

"It turns out we have seen something like this fairly recently on (shuttle mission) STS-122," Robinson radioed from mission control. "I don't know what you want to make of the common factors, but it was the same orbiter, the same GPC and the same MS-2." He was referring to Walheim, mission specialist No. 2.

"Yeah, Rex was telling me the story," Ferguson replied.

NASA mission control commentator Rob Navias said the loss of one general purpose computer would have no impact on rendezvous and docking.

"GPC-3 told itself to turn itself off, basically, at the time we were going into what is known as a set expansion for the rendezvous," he said. "This is when all the computers are brought up ... in support of the rendezvous activities. The switch detent that this GPC runs under thought it went into a halt and shut itself down. It will not be put back into the set of GPCs until once we dock to the International Space Station, and likely will not be recovered until Monday morning."

Here is an updated timeline of the crew's planned activities for flight day three (in EDT and mission elapsed time; includes revision C of the NASA television schedule; best viewed with fixed-width font):