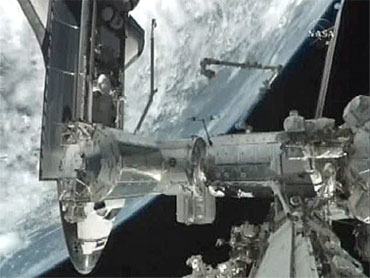 The shuttle Atlantis glided to a smooth docking with the International Space Station Sunday, capping a two-day orbital chase that began with blastoff Friday.

As they approached, Ham told the six space station residents that their home was "brilliantly glowing."

"It's an absolutely stunning view," he noted.

It will two hours or so to firmly lock the two spacecraft together and complete leak checks before hatches are opened and the station crew - Noguchi, Creamer, Expedition 23 commander Oleg Kotov, Tracy Caldwell Dyson, Alexander Skvortsov and Mikhail Kornienko - can welcome their shuttle colleagues aboard.

Prior to docking, the shuttle performed a slow backflip from 600 feet out, so all its surfaces could be photographed by astronauts on the space station. They snapped hundreds of pictures of Atlantis during its final approach.

The picture-taking was especially important this time. On Saturday, a snagged cable prevented the astronauts from properly inspecting the shuttle for any possible launch damage. NASA wanted extra pictures to make up for the abbreviated survey.

The astronauts may try to free the cable during one of three spacewalks planned for this week.

Ham, Antonelli, flight engineer Michael Good, Stephen Bowen, Piers Sellers and Garrett Reisman face a busy first day aboard the space station, transferring equipment to the lab and gearing up for a spacewalk Monday, the first of three planned for the mission.

Later today, Sellers and Caldwell Dyson will use the station's robot arm to pull a cargo pallet out of the shuttle's payload bay and mount it on a stowage fixture on the front side of the station's solar power truss. The cargo carrier holds a spare Ku-band antenna system that will be installed by Reisman and Bowen during Monday's spacewalk, along with an equipment mounting platform that will be attached to a Canadian robot arm extension.

The cargo carrier also holds six 375-pound batteries that will be installed during the mission's second and third spacewalks.

This is NASA's last planned flight of Atlantis. Only two more shuttle missions remain before the fleet is retired.

Flight controllers, meanwhile, said there was no threat from a piece of space junk that they've been monitoring for the past few days.

The unidentified debris is in an extreme egg-shaped orbit that takes it thousands of miles above the space station to just below it. The closest approach was to occur about an hour after docking, bringing the junk within an estimated six miles of the two spacecraft. Experts determined Saturday night there was no need for the station to move out of the way.