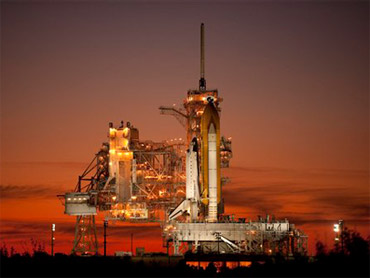 Space shuttle Atlantis has been cleared for liftoff.

Mission managers on Wednesday gave the go-ahead for the countdown to proceed toward Friday afternoon's planned launch. It will be 32nd and final flight for Atlantis.

Everything is looking good for an on-time launch at 2:20 p.m. Managers are tracking no technical troubles, and forecasters say there's a 70 percent chance the weather will cooperate.

Atlantis will carry up spare parts for the International Space Station during its 12-day mission, The craft and the mission's six astronauts are delivering an Integrated Cargo Carrier and a Russian-built Mini Research Module.

"From a Space Shuttle Program and ISS Program standpoint, we're ready to launch Atlantis and get this mission under way," said Mike Moses, chair of the prelaunch mission management at the Kennedy Space Center. Launch Director Mike Leinbach said the launch team has not uncovered any issues that might prevent an on-time liftoff.

The all veteran crew will be commanded by NASA astronaut Ken Ham. The other members include pilot Tony Antonelli, and Mission Specialists Michael Good, Garrett Reisman, Piers Sellers and Steve Bowen.

Only two shuttle missions remain after this one. NASA is retiring its three shuttles to focus on new technologies and rockets that could one day get astronauts to asteroids and Mars.

Reisman, Good, and Bowen will work in two-man teams for three planned spacewalks to install the backup antenna, the solar array batteries and other equipment. Sellers, who will operate the station's robot arm during the spacewalks, will assist Reisman on the arm during installation of the Russian mini-research module, or MRM-1, on the fifth day of the mission.

The 17,760-pound MRM-1, also known as "Rassvet," is packed with 3,086 pounds of NASA equipment and supplies and carrying an experiment airlock and European robot arm equipment that will be attached to other modules later.

Docked to the Earth-facing port of the central Zarya module, MRM-1 will bring additional pressurized volume for research and stowage and provide needed clearance between the forward Russian docking port and a U.S. storage module scheduled for attachment later this year.

The Russian module's docking system is virtually identical to the systems used by Progress and Soyuz spacecraft that dock with considerably more force than NASA typically employs. The station's robot arm cannot match that docking force, but by precisely centering the docking mechanisms, engineers are confident the Canadian space crane can get the job done.

"This module was originally designed to fly up, like all the other Russian modules, and dock under its own power, autonomously," Reisman said. "The way they do that is they have big cone (on one module) and a big probe (on the other), they get a good running start and it's almost like bringing train cars together. I was inside the station a couple of times when dockings occurred and you can feel her come in. It's definitely an event.

"What we're trying to do here is very different. ... They call it 'mini' but like many things, it's actually very big," said Reisman, who stands 5 feet 4 inches tall and is jokingly known as "Big G." "To have it on the very end of the arm, with the arm fully extended, there are a lot of dynamics at play. So the arm can't get the kind of ramming speed it normally develops under its nominal means of docking. So we're going to be restricted to coming in approximately five times slower, and that's the fastest the arm can do safely.

"What we hope to do is have very fine control and have it come right down the middle. There are a lot of people who have worked really hard, did a lot of analysis to verify this is going to work. But the exciting thing is it's never been done before and so I'm sure we'll all be watching very carefully as we bring that in on flight day five."