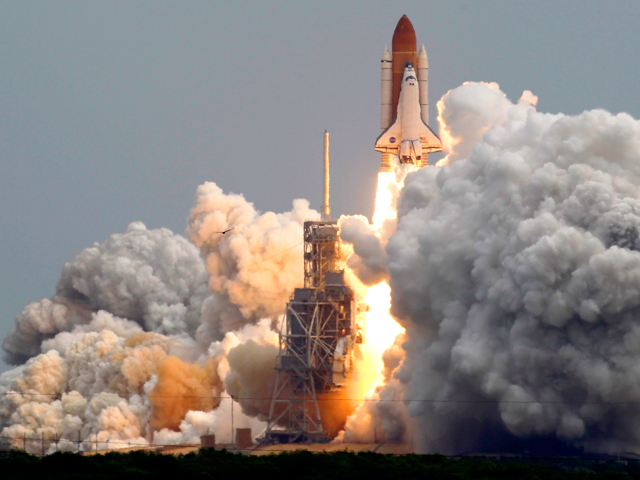 The weather was an issue all morning, with forecasters predicting a 70 percent chance of low clouds and rain that could cause a delay. Conditions improved as the morning wore on, but concern about rain showers near the space center resulted in an official "no-go" forecast for an emergency return to the Kennedy Space Center's shuttle runway.

After discussing the potential for rain and electrical activity, NASA's mission management team waived a flight rule requirement and Atlantis was cleared for launch.

"We're not ending the journey today," Ferguson said. "We're completing a chapter of a journey that will never end.

"Let's light this fire one more time," the commander said.

With the retirement of the U.S. orbiters, Kennedy Space Center was packed with tens of thousands of shuttle workers, astronauts and invited guests. Up to a million spectators gathered across coastal Florida - some camping overnight - to watch today's launch and be a part of U.S. space history.

NASA's original shuttle pilot, Robert Crippen, now 73, was among the VIPs. He flew Columbia, along with Apollo 16 moonwalker John Young, on the inaugural test flight in 1981. Other notables on the guest list: a dozen members of Congress, Cabinet members, the chairman of the Joint Chiefs of Staff, four Kennedy family members, singers Jimmy Buffett and Gloria Estefan, and two former NASA chiefs.

"I'm a little bit sad about it, and a little bit wistful," said Jennifer Cardwell, 38, who came with her husband, John, and two young sons from Fairhope, Alabama. "I've grown up with it."

After Atlantis slipped into orbit, Launch Director Mike Leinbach said the launch team lingered in the firing room, reluctant to bid each other farewell.

"A lot of us walked around and shook everybody's hand," he said. "It seemed like we didn't want to leave, it was like the end of a party and you just don't want to go, you just want to hang around a little bit longer and relish our friends and what we accomplished. It was very special, lots of pats on the back today."

"What a truly awesome day today," said Bill Gerstenmaier, chief of space operations at NASA Headquarters. "We got to witness something really, really special and something really amazing. ... I'm really talking about the teams and the people who supported the launch that just occurred."

The early moments of the flight appeared normal and a camera mounted on the side of the external tank showed no obvious signs of any major problems as the shuttle climbed away. But as usual, analysts at the Johnson Space Center will spend the next few days reviewing imagery and radar data to make sure no debris struck Atlantis' fragile heat shield.

If all goes well, Ferguson will guide Atlantis to a docking at the space station's forward port at 11:10 a.m. Sunday. The next day, an Italian-built cargo module will be attached to the Earth-facing port of the forward Harmony module and the combined 10-member shuttle-station crew will begin a hectic week of work to move five tons of equipment and supplies into the lab complex.

The supplies packed into the Raffaello module are critical to the space station program. Two companies - Space Exploration Technologies (SpaceX ) and Orbital Sciences Corp. - are building unmanned cargo ships to take over from the shuttle after the fleet is retired with initial test flights expected later this year or early next.

Atlantis' mission was added to the shuttle manifest to deliver enough supplies to keep the station provisioned through 2012 as a hedge against development problems that might delay the commercial cargo ships.

"Some folks look at this flight and perhaps don't see the excitement because we don't have a piece of our assembly hardware going up," said Michael Suffredini, the space station program manager at the Johnson Space Center in Houston.

"But we've got the (cargo module) as full as we've ever had it, we've got the middeck. All of these supplies are going to be the lifeline to help us extend the period of time we can go on orbit before our commercial providers start flying regularly to ISS. That's critical to us, to give them the time they need to make sure their vehicles are ready to go fly, finish their development and get their test fights behind them and then start servicing ISS.

"From our perspective, although it doesn't look very sexy, it's one of the most important fights that we've ever had come to ISS."

With a reduced crew of four, only one spacewalk is planned during Atlantis' visit, a six-and-a-half-hour excursion by station flight engineers Ronald Garan and Michael Fossum. Their primary objectives are to move an experimental robotic refueling package from Atlantis to the station and to mount a failed ammonia coolant pump in the shuttle's cargo bay for return to Earth.

With an on-time launching Friday, NASA managers are expected to extend the mission one day to give the crew more time to pack up the cargo module with no-longer-needed equipment and trash. But a final decision will not be made until engineers make sure the shuttle's fuel cells have enough hydrogen and oxygen to support the extra day.

As of this writing, the flight plan calls for the astronauts to undock from the station around 2 a.m. on July 18. Landing back at the Kennedy Space Center is expected around 7 a.m. on July 20 - the 42nd anniversary of Apollo 11's touchdown on the moon.

If the flight is extended, however, undocking would occur around 1:30 a.m. on July 19, setting up a pre-dawn landing at the Florida spaceport around 6 a.m. on July 21.

For tens of thousands of past and present shuttle workers, including more than 3,000 expecting layoffs July 22, the traditional "wheels stopped" call from Ferguson will signal the end of an era, bringing the curtain down on three decades of shuttle operations.

"After the wheels have stopped and the displays go blank and the orbiter is unpowered for the final time ... there will be a rush of emotion when we all finally realize that's it, that it's all over, the crowning jewel of our space program, the way we got back and forth from low-Earth orbit for 30 years ... we'll realize that's all over," Ferguson said before launch. "That's going to take a little while to deal with."

When Atlantis returns, it will be put on display at the Kennedy Space Center. Discovery and Endeavour already are retired and being prepped for museums in suburban Washington and Los Angeles.