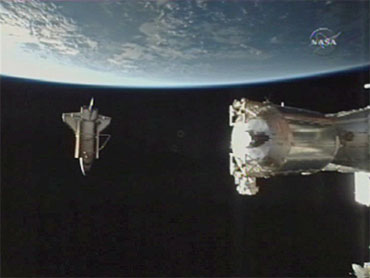 The shuttle Atlantis undocked from the International Space Station Sunday, wrapping up a week of assembly work to install a new Russian module loaded with 1.5 tons of NASA cargo, along with a backup Ku-band antenna, six new solar array batteries and more than a ton of other equipment and supplies.

"Atlantis, station is now in attitude control," flight engineer Timothy Creamer radioed a few moments later. "Hock, I've gotta tell you, you guys were consummate professionals with a great sense of humor, we were so glad to see you, loved working with you. See you soon, brother. Stay safe."

"Copy all, T.J., and same comments right back at you, brother," Ham replied.

Atlantis slowly pulled away to a point about 400 feet directly in front of the station where Antonelli began a 360-degree photo-documentation loop around the lab complex.

"I get to fly the separation," he said before launch. "I'll do a one-lap fly around of the space station. We train that a lot in the sim. It turns out the view is much better for real and the flying is more fun when you can actually feel the vehicle moving around."

The astronauts beamed down spectacular views of the space station as the shuttle looped up, over and behind the lab complex as the two spacecraft sailed above Mexico and the central United States on a southwest-to-northeast trajectory.

During a week of docked operations, the astronauts installed the 17,760-pound Russian mini-research module (known as Rassvet), and staged three spacewalks last Monday, Wednesday and Friday to install a backup Ku-band antenna system, an equipment mounting platform and to replace six batteries in the port-6 solar array.

Altogether, the Atlantis astronauts delivered 28,792 pounds of equipment and supplies to the space station. Total cargo being carried back to Earth, including the old P6 batteries and the cargo pallet holding them in place, adds up to 8,229 pounds.

The Atlantis astronauts plan to carry out a final heat shield inspection Monday before packing up and testing the shuttle's re-entry systems Tuesday.

Landing back at the Kennedy Space Center is targeted for 8:48 a.m. Wednesday morning, weather permitting.

Three hours before undocking, the two crews gathered for a brief farewell ceremony in the forward Harmony module.

"This is time when we have to say goodbye to our friends, our colleagues, the excellent crew of shuttle Atlantis that did an excellent job performing three EVAs, installing the new Russian module, having good fun, enjoying living on station and working in space," said Expedition 23 commander Oleg Kotov.

"They show good example of friendship, professionalism and classic attitudes in their behavior. ... So again, thank you Ken, for excellent job. We enjoyed working with you."

"Well, Oleg, we are one happy shuttle crew," Ham replied. "And we are happy because of all of your effort, too. I think through our entire docked timeframe here we were a 12-person crew that operated together. And that was the only way we got everything done. ... So we are happy. But this one is to friends we're going to leave behind, and new friends that we've made, close friends. We've had a great time together.

"We are going to close the hatch shortly and we're going to depart," Ham said. "And of course, as always, it'll be a little bit sad. But we'll see you all on the surface of planet Earth again soon."

Kotov, Creamer and Japanese astronaut Soichi Noguchi plan to follow the Atlantis astronauts back to Earth in nine days, departing June 1 (U.S. time) aboard the Soyuz TMA-17 capsule for a landing in Kazakhstan to close out a six-month stay in space.

Cosmonaut Alexander Skvortsov will take command from Kotov, remaining aboard the station with Caldwell Dyson and Mikhail Kornienko as the Expedition 24 crew. They will be joined by cosmonaut Fyodor Yurchikhin, Douglas Wheelock and Shannon Walker, who are scheduled for launch aboard the Soyuz TMA-19 spacecraft on June 15.