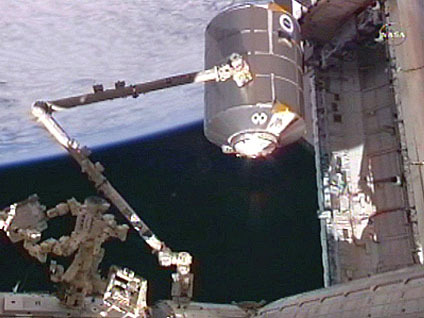 Using the International Space Station's robot arm, the Atlantis astronauts pulled a bus-size cargo module from the shuttle's payload bay early Monday, kicking off a slow-motion move to a port on the lab's forward Harmony module to clear the way for a busy week of logistics transfers.

The Italian-built Raffaello module is loaded with 9,403 pounds of supplies and equipment, including 2,677 pounds of food, that will help keep the station crew supplied through 2012.

Along with attaching Raffaello to the space station, the astronauts and flight controllers plan to restart one of the shuttle's four general purpose computers that was inadvertently shut down during rendezvous with the station Sunday. Engineers believe the computer is healthy and that the shutdown was triggered by a temperamental switch.

Station Flight Director Courtenay McMillan said flight controllers are no longer worried about a possible "conjunction," or close approach, with a piece of debris from an old Russian satellite. Initial tracking passes indicated the debris might pass close to the station Tuesday, but follow-on observations show no need for an avoidance maneuver.

"We got a couple of more opportunities to get some data on this shift and decided the probabilities are trending really low," McMillan said. "So we are not currently planning to do any debris avoidance maneuver. It looks pretty good, this is something we see a lot on the station side. We followed our normal process and we're going to continue to track it. But right now, it's looking really good."

Pilot Douglas Hurley and Sandra Magnus, operating the space station's robot arm, began Raffaello's unberthing from Atlantis' payload bay around 5:47 a.m. EDT. The multi-purpose logistics module, or MPLM, will be maneuvered to the Earth-facing port of the station's forward Harmony module and locked in place with 16 motor-driven bolts in the port's common berthing mechanism,

Above: Atlantis' vertical stabilizer and payload bay are backdropped against a mostly blue Earth scene in this view photographed by one of the STS-135 crewmembers using windows on the spacecraft's aft flight deck, July 9, 2011. (NASA)

"They have to get all the vestibule connections hooked up so that we have ventilation and power and all that good stuff so we can do all the transfer operations later on," McMillan said. "So it'll be about one o'clock in the afternoon Houston time, maybe a little earlier if they get ahead."

Atlantis' mission was added to NASA's shuttle manifest to deliver enough supplies, spare parts and other gear, in concert with Russian, European and Japanese cargo ships, to support the station's six-person crew through 2012 even if new commercial cargo carriers designed to take over resupply duties from the shuttle run into problems.

Raffaello is packed with "one year's worth of food, we're taking about 2,000 pounds of science equipment, we're taking hygiene items, we're taking clothing, we're taking thousands of pounds of spare parts for the different systems, life support system, the electrical system, the computer system and so forth," Magnus said in a NASA interview. "We're trying to supply the station for a whole year, and that hedges our bets against when the commercial follow-on cargo contracts will be available up and running."

It will take the combined shuttle-station crew a full week to unload Raffaello and to reload it with 5,660 pounds of trash, packing material and other no-longer-needed equipment that will be returned to Earth aboard Atlantis.

Later today, the astronauts will review plans for a spacewalk Tuesday by station flight engineers Ronald Garan and Michael Fossum. The primary goals of the excursion, the only EVA planned during Atlantis' visit, are to move a failed ammonia coolant pump to the shuttle for return to Earth and to install an experimental robotic refueling experiment on the station. The six-and-a-half-hour spacewalk is scheduled to begin at 8:44 a.m. Tuesday.