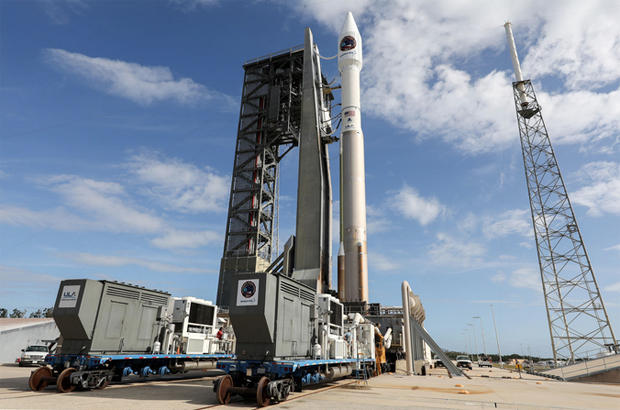 Running nearly a month late because of hydraulic problems, an Atlas 5 rocket was hauled to its Florida launch pad Monday, setting the stage for blastoff Tuesday on a mission to boost a space station-bound Orbital ATK Cygnus cargo ship into orbit.

Liftoff from complex 41 at the Cape Canaveral Air Force Station is targeted for 11:11 a.m. EDT (GMT-4), the opening of a 30-minute window. Forecasters are predicting a 90 percent chance of acceptable weather Tuesday and Wednesday.

The flight is the seventh operational space station resupply mission carried out by Orbital ATK under commercial contracts with NASA and the company’s third using a United Launch Alliance Atlas 5 rocket.

Take off is timed to roughly coincide with the moment Earth’s rotation carries the pad into the plane of the station’s orbit, a requirement for spacecraft trying to rendezvous with a target moving at some 5 miles per second in low-Earth orbit. The Atlas 5 has enough power to permit a half-hour launch window, a luxury smaller station-bound boosters do not enjoy.

Giving the public an unusual “virtual” view of the flight, NASA, working with ULA and Orbital, will provide a video stream on YouTube using a 360-degree camera system starting 10 minutes before liftoff (https://www.youtube.com/user/NASAtelevision).

“It’s great, to be able to get in there and experience that 360-degree view, combining it with the Oculus Rift goggles and things like that, it really gives you a new perspective we’ve never been able to do before,” said Vernon Thorp, manager of commercial programs for United Launch Alliance.

In a statement, NASA said “minimum viewing distance is typically miles away from the launch pad, but the live 360 stream enables viewers to get a pads-eye view.”

The Atlas 5’s Russian-built RD-180 first stage engine, generating 860,200 pounds of thrust, will boost the rocket out of the dense lower atmosphere, firing for just over four minutes before shutting down and falling away.

The rocket’s hydrogen-fueled Centaur second stage engine, an RL10C built by Aerojet Rocketdyne, will fire for about 13-and-a-half minutes to put the Cygnus in its initial orbit. If all goes well, the cargo ship will be released to fly on its own about 21 minutes after liftoff.

After its two solar panels unfurl, the spacecraft will execute a complex series of thruster firings to catch up with the station.

Resupply spacecraft typically rendezvous with the station over two to three days, but the Cygnus will loiter in orbit until Saturday morning, staying well clear of the space lab until after the arrival of a Russian Soyuz spacecraft Thursday morning.

The Soyuz MS-04/50S spacecraft, carrying vehicle commander Fyodor Yurchikhin and flight engineer Jack Fischer, is scheduled for launch from the Baikonur Cosmodrome in Kazakhstan at 3:13 a.m. EDT Thursday. Docking at the station’s upper Poisk module is expected around 9:23 a.m. that same morning.

Soyuz spacecraft normally carry three people, but Russia recently decided to reduce its crew complement, and the number of yearly Russian supply missions, to save money. As a result, the third seat of the Soyuz MS-04 vehicle will carry additional supplies, not an astronaut or cosmonaut.

In any case, assuming the Soyuz docks on schedule, the Cygnus spacecraft will make its own approach to the space station early Saturday, pulling up to within about 30 feet just after 6 a.m. Saturday and then standing by while Whitson and Pesquet, operating the station’s robot arm, lock onto a grapple fixture.

At that point, flight controllers at the Johnson Space Center in Houston will take over to pull the Cygnus in for berthing at the Earth-facing port of the central Unity module.

The cargo ship is loaded with some 7,625 pounds of cargo and equipment, including more than 2,000 pounds of science gear, 2,100 pounds of crew supplies and nearly 2,700 pounds of vehicle hardware. Also on board: 160 pounds of spacewalk equipment, about 40 pounds of Russian hardware and fresh fruit and other treats for the crew.

“We are sorry we missed Easter, but we’re pretty sure they’ll be excited about their Easter baskets and whatever great things International Space Station science put on board for them,” said Frank Culbertson, a former shuttle commander who now serves as president of Orbital’s Space Systems Group.

In the wake of a spectacular 2014 Antares launch failure, the company decided to replace the booster’s Russian-built first-stage engines with more modern engines, also built in Russia. While that work was going on, Orbital used Atlas 5s for two Cygnus missions in 2015 and 2016.

Orbital successfully launched the re-engined Antares last October, but opted to buy a third Atlas 5 for this week’s flight based on payload requirements from NASA.