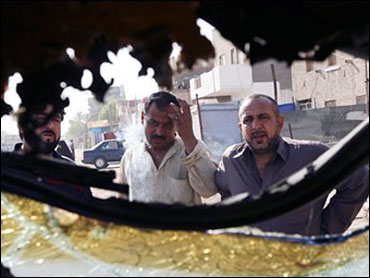 A suicide bomber struck a U.S.-promoted reconciliation meeting of Shiite and Sunni tribal sheiks Monday, killing at least 15 people, including the city's police chief, and wounding about 30 others among them the provincial governor, U.S. and Iraqi officials said.

Two U.S. soldiers were also wounded in the blast, which occurred about 8:30 p.m. at a Shiite mosque in Baqouba, a former al Qaeda in Iraq stronghold about 35 miles northeast of Baghdad, U.S. and Iraqi officials said.

The brazen attack, which bore the hallmarks of al Qaeda in Iraq, represented a major challenge to U.S. efforts to bring together Shiites and Sunnis here in Diyala province, scene of some of the bitterest fighting in Iraq.

About two hours after the blast, U.S. soldiers at nearby Camp Warhorse fired artillery rounds at suspected insurgent positions near Baqouba. There were no reports of damage or casualties.

Most of the victims were in the mosque courtyard washing their hands or sipping tea during Iftar -- the daily meal in which Muslims break their sunrise-to-sunset fast during the holy month of Ramadan -- when the bomber struck, witnesses and officials said.

Security guards approached a man after noticing him walking rapidly through the courtyard. As the guards challenged him, the man detonated an explosive belt, setting off the devastating blast, said police Maj. Salah al-Jurani.

Al-Jurani said he believed provincial Gov. Raad Rashid al-Tamimi was the intended target. The governor was wounded and his driver was killed, al-Jurani said.

The dead also included Baqouba's police chief, Brig. Gen. Ali Dalyan, and the Diyala provincial operations chief, Brig. Gen. Najib al-Taie, according to security officials. They spoke on condition of anonymity because they were not supposed to release the information.

Also wounded was the governor's brother, Sheik Mazin Rashid al-Tamimi, who has spearheaded Sunni-Shiite reconciliation efforts in the province.

"We've tried to convince the tribes to oust terrorists from their areas because it's a disaster when the tribes cooperate with and provide refuge to al Qaeda," Sheik Mazin told The Associated Press last weekend.

U.S. officials have accelerated efforts to reconcile Sunni and Shiite tribes in Diyala after American soldiers gained control of Baqouba, the provincial capital, in fighting last summer. Al Qaeda had declared Baqouba the capital of its Islamic State of Iraq.

The U.S. announced this month that top leaders of 19 of the 25 major tribes in Diyala -- 13 Sunni and six Shiite -- had agreed to end sectarian violence and support the government, although the province remains one of the most dangerous in the country with frequent kidnappings and armed clashes.

To the north, Iran shut down five major border crossing points into Kurdish areas Monday to protest the U.S. arrest and detention of an Iranian official accused by the U.S. military of links to an elite force smuggling weapons into this country to kill Americans.

Crossing points elsewhere along the 900-mile border were operating normally.

Iran's semiofficial Mehr news agency said the closures were to protest the arrest last Thursday of Mahmudi Farhadi, an Iranian regional official who was detained by American troops at a hotel in Sulaimaniyah, a Kurdish city 160 miles northeast of Baghdad.

U.S. officials said Farhadi was a member of the Quds force of the Iranian Revolutionary Guards that smuggles weapons to Shiite extremists in Iraq. But Iraqi officials say he was here legally and should be set free.

In New York, Iranian President Mahmoud Ahmadinejad told The Associated Press that the border closure was intended to protect religious pilgrims and that "commercial goods and freight transactions continue."

However, a Kurdish merchant from Sulaimaniyah said he had three trucks loaded with construction materials stuck on the Iranian side of the border near Panjwin. "They didn't allow them to cross, they closed the gate," Khalid Aman Sulaiman said.

Merchants and officials said hundreds of trucks were backed up on the Iranian side and no goods were being allowed across.

"We are paying the price for the U.S.-Iranian struggle in Iraq," complained businessman Rashid Saleh as he fretted over his shipment of Iranian dairy products stuck under a blazing sun on the Iranian side of the border at Panjwin. "What is our guilt? We have families to feed."