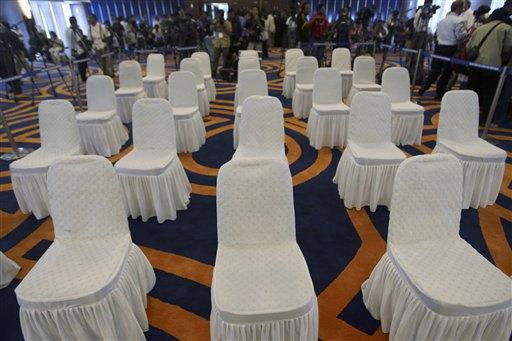 A long-awaited auction of ancient treasures salvaged from the sea opened Wednesday in the Indonesian capital - and then abruptly closed because there were no registered bidders.

The auction, announced barely a week ago, had been expected to fetch at least $80 million for a collection of more than 270,000 pieces of valuable ceramic pots, jewelry and crystals retrieved from a sunken Chinese ship dating to the 10th century.

But government organizers admitted they had not given enough notice to potential buyers. The $16 million security deposit was another likely deterrent.

Maritime Affairs Ministry official Sudirman Saad said he had heard from more than 20 interested parties overseas but none had followed up with a deposit by Tuesday's deadline.

And so the auction was officially opened in the Maritime Affairs Ministry in Jakarta, in keeping with the schedule but with the knowledge there would be no bids.

The treasure trove was salvaged in 2004 and 2005 from a wooden Chinese ship that sank more than 1,000 years ago in the Java Sea, at the time a key trade route linking Asia with Europe and Middle East. While most of the goods are fine white or green wares from northern and southern China, the vessel also held Egyptian artifacts and Lebanese glassware.

Christie's was originally expected to hold an auction as early as 2007, but that fell through as the Indonesian government struggled to come up with regulations for the sale of sunken treasures found within Indonesian waters. The regulations finally in place require bidders to front up to 20 percent of the minimum price of the objects for sale - in this case, $16 million.

The regulations also stipulate that if an auction fails three times, the government can directly approach potential buyers, including other governments. China, for example, may be interested in recovering the treasures, as the bulk of the collection was Chinese, Saad said.

Adi Agung, director of PT Paradigma Putra Sejathera, the local company that conducted thousands of dives to help retrieve the artifacts from the shipwreck in the Java Sea discovered by Indonesian fishermen, was discouraged by the strict regulations that prevented Wednesday's auction.

"There are so many sunken ships full of ancient treasures in Indonesia that invite many treasure-hunters, but the conditions are still not conducive for investment in this sector," Agung said.

He said his company invested $10 million in its part of the government-licensed salvage project, working along with Belgium-based Cosmix Underwater Research.

When the auction does go ahead, the Indonesian government will take 50 percent of the proceeds, with the remainder shared among the salvagers.