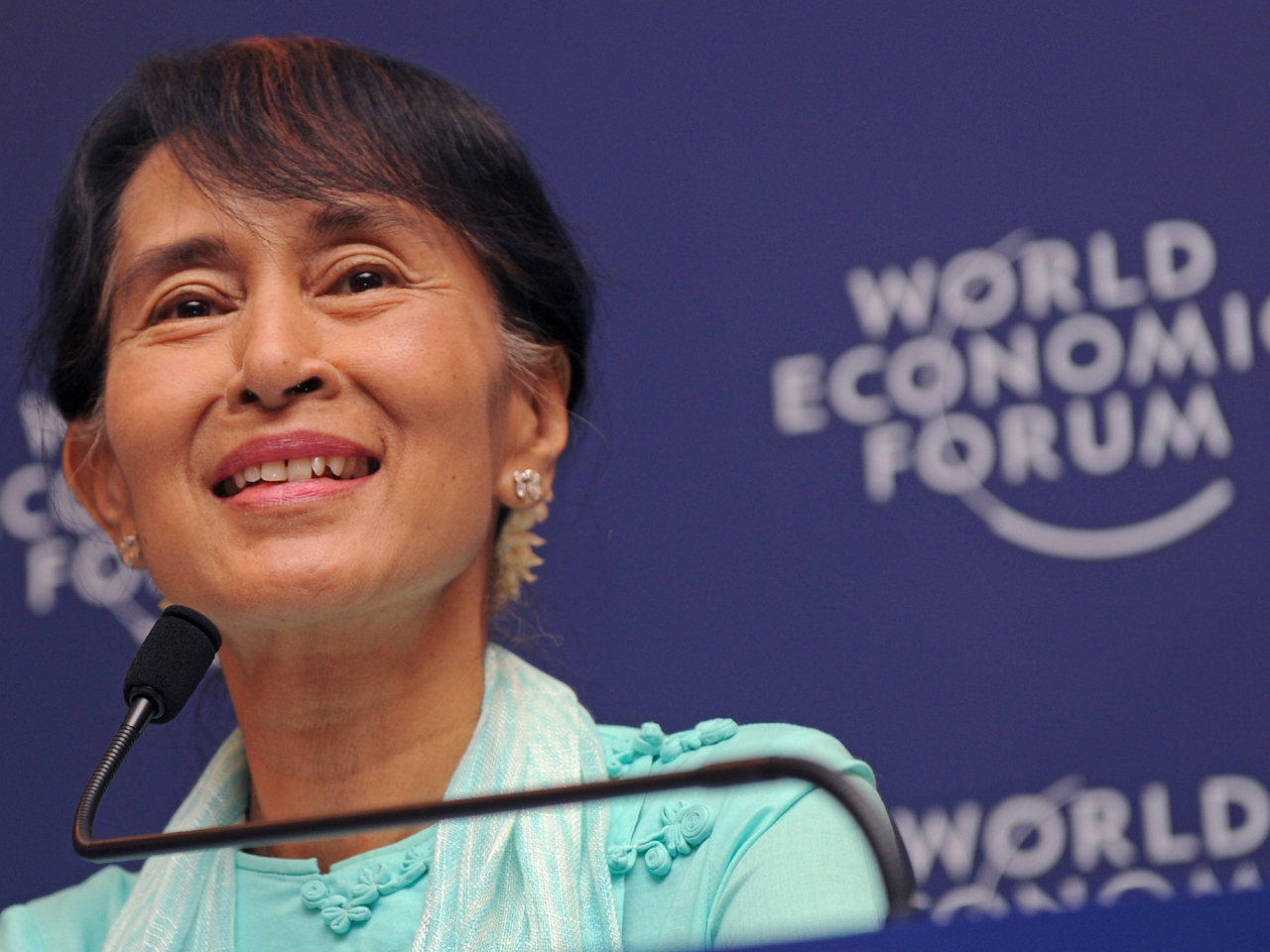 It is not the first time that Suu Kyi has called for caution in the world's approach to Burma — but it is the first time the Nobel prize winner has uttered the sentiment on foreign soil in a speech that was broadcast live across several time zones.

After 24 years of isolation in Burma, also known as Myanmar, Suu Kyi received a standing ovation as she took the podium at the World Economic Forum, where she delighted the audience with a story about being invited into the cockpit as she landed in Bangkok — her first international flight in decades. At first she marveled at the high-tech control panel but then was "completely fascinated by the light" of modern Bangkok sprawled out below her.

The forum's founder, Klaus Schwab, introduced her as "one of the most extraordinary personalities this century."

The 66-year-old Suu Kyi spent 15 out of 22 years locked under house arrest by the former military regime. She was granted freedom after Myanmar held elections in 2010 and was elected to Parliament in April, capping a stunning personal story.

Since elections last year, Burma's President Thein Sein has surprised much of the world by engineering sweeping reforms, but Suu Kyi noted that the country is still in the very early phases of making democratic reforms.

"These days I am coming across what I call reckless optimism," she said, drawing applause from the room packed with several hundred people and a wall of TV cameras. "A little bit of healthy skepticism I think is in order."

Burma's reforms have prompted the U.S. and Europe to ease economic sanctions they imposed during the military's regime, but some human rights groups have warned that while those moves are good for the country's development they will weaken incentives to continue democratic reforms.

Suu Kyi's speech lasted about 10 minutes and was followed by a question-answer session with Schwab. She focused her talk on how the world could help "that little piece of the world that some of us call Burma and some of us call Myanmar."

She listed the country's most essential needs as secondary education to foster political reforms and jobs to end high youth unemployment that she called "a time bomb." She said Burma still lacks rule of law and an independent judiciary.

"We need basic education in Burma," she said, "the kind of education that will enable our people to earn a decent living for themselves."

Burma's sputtering economy, in ruins after half a century of military rule and years of harsh Western sanctions, has led to huge unemployment and has forced millions of people to seek jobs abroad.

"I keep telling our people, it's true that we are behind everyone else but it means we can learn from the mistakes of everyone else," she said.

Dressed in blue silk with a strand of white flowers in her hair, Suu Kyi drew laughter from the crowd as she shared the anecdote of her first impressions of leaving Burma after 24 years of isolation. Suu Kyi said that the captain of her Thai Airways flight was "so very kind as to invite me to sit in the cockpit."

Bangkok is a stark contrast to sleepy Yangon where rolling blackouts due to electricity shortages have spurred protests for more than a week. Thirty years ago the two cities were not so far apart, she said, but: "Now the difference is considerable."

She drew laughter from the audience by adding: "What went through my mind was, 'We need an energy policy!"'