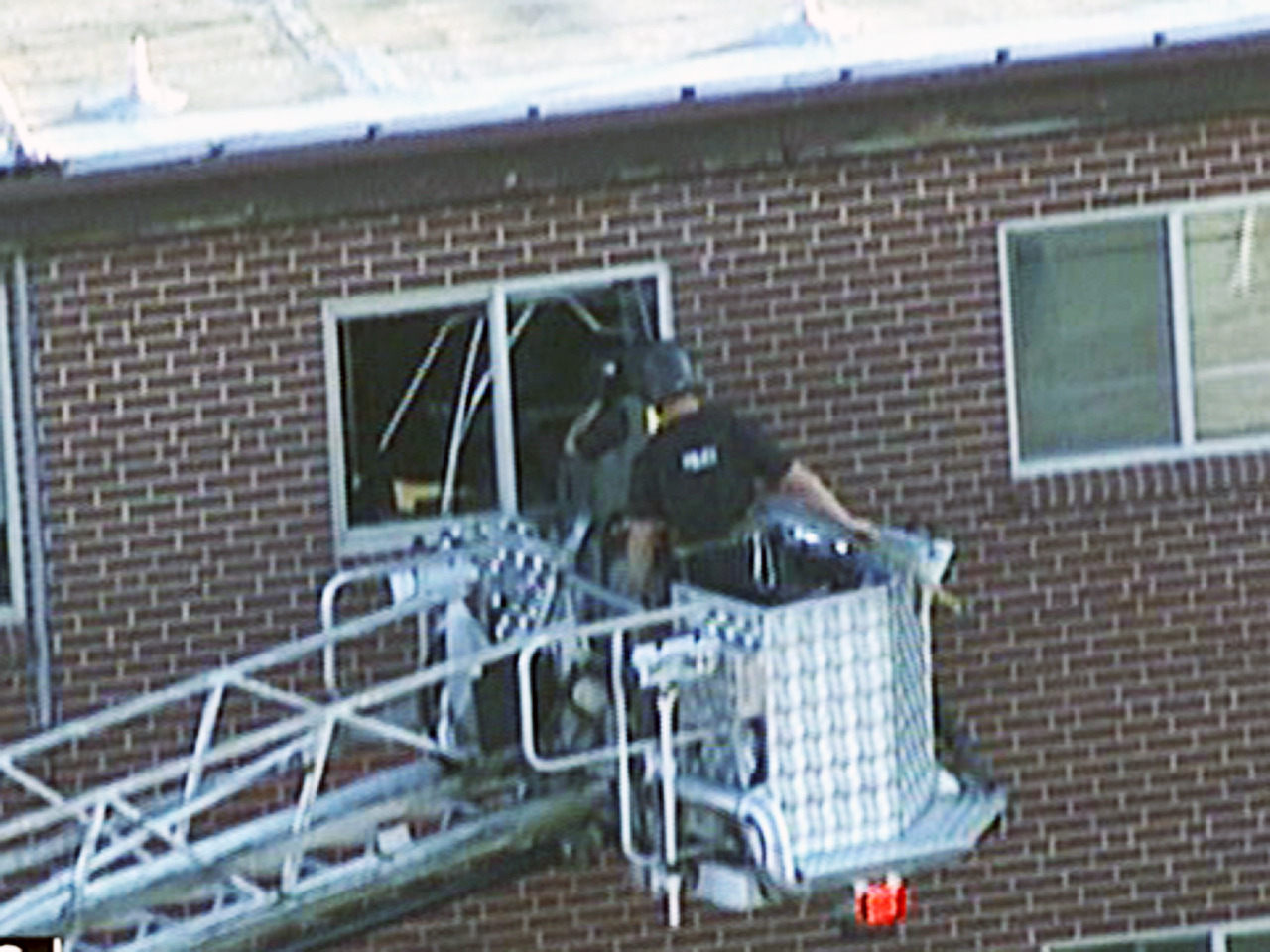 Holmes is being held in what is now the biggest mass shooting in U.S. history. Twelve people were shot and killed and 58 hurt, most by gunfire -- and some in the chaos as patrons rushed to flee the theater -- allegedly by the 24-year-old Holmes at a midnight premiere of the Batman movie "The Dark Knight Rises" Friday.

He says he rigged his apartment with a complex system of booby traps and explosives, and police say they have found no way of safely diffusing them.

"It is a very vexing problem how to enter that apartment safely," Aurora Police Chief Dan Oates says. "I personally haven't seen anything like what the pictures show us is in there. I'm a layman when it comes to bomb stuff, (but) I see an awful lot of wires, trip wires, jars full of ammunition ... jars full of liquids, mortar rounds. We have a lot of challenges to get in there safely."

After spending most of Friday evacuating and scouring the complex, investigators were planning for the possibility they would have to detonate the devices, using a robot, while trying to limit the damage.

And Aurora residents are coming together to support each other, as well as the victims who remain in critical condition.

Friday night, massacre turned into mourning at a private vigil in Aurora.

"That's how we move forward. We're there for each other," one mourner said.

"It's so sad," said one of two girls hugging each other and crying.

Near the entrance to the Aurora theater's parking lot, a makeshift memorial of 12 candles sat in a row near piles of flowers. Up the hill, about 20 pastors led an emotional vigil for about 350 people, some hugging and crying. A sign read, "7/20. Gone Not Forgotten."

An emotional Gov. John Hickenlooper said earlier Friday that people would not be defined by the tragedy.

"We are clear that we are going to rise back and lift ourselves above this," he said.

"They're saying somebody's shooting in the auditorium," one police officer is heard saying on a 911 tape. " ... They're saying there are hundreds of people just running around."

Speaking from his hospital bed, victim Stephen Barton said, "I don't really remember people starting to scream until I got hit, and then it was mass mayhem. ... On one level, I thought, 'OK, there's a shooter in the theater and he's trying to kill people,' but on another level, Ii didn't really want to believe it.

"Everybody get on this, it's an assault rifle," one officer on a radio said. "We got magazines down inside. Everybody watch out for the assault rifle."

Another officer can be heard saying, "We see suspect in gas mask!"

Authorities say Holmes, the alleged assailant, had three guns on him and one in his car -- all legally purchased at Colorado gun stores. Officials say he also purchased over 6,000 rounds of ammunition on the Internet.

And while Holmes surrendered without a fight, it's clear that he carefully staged his attack.

"Based on his behavior and based on planning that went into it, he very likely is sitting back enjoying the impact of the crime," observes former FBI profiler Mary Ellen O'toole. "It's very unnerving when you think about that."

The suspect's stellar academic record, apparent shy demeanor and lack of a criminal background made the attack even more difficult to fathom.

It also wasn't known why the suspect chose a movie theater to stage the assault, or whether he intended some twisted, intended symbolic link to the film itself.

Holmes had enrolled last year in a neuroscience Ph.D. program at the University of Colorado-Denver, though he left the program last month for unknown reasons. In academic achievement, "he was at the top of the top," recalled Timothy P. White, chancellor at the University of California, Riverside, where Holmes earned his undergraduate degree before attending the Denver school.

Those who knew Holmes described him as a shy, intelligent person raised in California by parents who were active in their well-to-do suburban neighborhood in San Diego. Holmes played soccer at Westview High School and ran cross-country before going to college.

Police released a statement from his family Friday that said, "Our hearts go out to those who were involved in this tragedy and to the families and friends of those involved."

The fatalities included 23-year-old Micayla Medek, said Anita Busch, the cousin of Medek's father. The family took the news hard, but knowing her fate after waiting without word brought them some peace, Busch said.

"I hope this evil act, that this evil man doesn't shake people's faith in God," she said.

Besides Medek, relatives confirmed that Alex Sullivan and Jessica Ghawi were among those killed, Sullivan on his 27th birthday.

The new Batman movie, the last in the trilogy starring Christian Bale, opened worldwide Friday with midnight showings in the U.S. The plot has the villain Bane facing Bale's Caped Crusader with a nuclear weapon that could destroy all of fictional Gotham.

In New York City, Police Commissioner Raymond Kelly said: "It clearly looks like a deranged individual. He has his hair painted red. He said he was the Joker, obviously the enemy of Batman."

Oates would not confirm that information, but did say he had spoken to Kelly. The two used to work together in New York. Asked whether Holmes had makeup to look like the Joker, Oates said: "That to my knowledge is not true."

A federal law enforcement official said Holmes bought a ticket to "The Dark Knight Returns," went into the theater as part of the crowd and propped open an exit door as the movie was playing. The suspect then donned protective ballistic gear and opened fire, the official said, speaking on condition of anonymity to discuss the ongoing investigation.

Authorities said he hit scores of people, picking off people who tried to flee. At least one person was struck in an adjacent theater by gunfire that went through the wall. Adding to the terror and chaos were gas canisters thrown by the suspect that filled the packed suburban Denver theater with smoke.

Tanner Coon, a 17-year-old Aurora resident who was watching the film with two friends, said he first thought the gunshots were firecrackers. When he realized what was happening, he ducked between the seats and waited for the shooter say what he wanted.

"When is he going to start telling us what to do? When is this going to become a hostage situation?" Coon said.

When the firing ended, Coon started running up the row, but slipped in blood and fell on top of a woman who was lying on the ground. He tried shaking her, he said, but she didn't respond, so he left her behind and ran out of the theater.

After dealing with Holmes' apartment, says Oates, it will be time for his town -- and his officers -- to heal.

"Our cops went through a lot," he points out. " ... They rushed people out of that theater into police cars. I've heard some compelling stories. ... When this has slowed down, one of our highest priorities is to deal with our own officers and how they cope with this event.

His first court appearance is slated for Monday morning.

The shooting was the worst in the U.S. since the Nov. 5, 2009, attack at Fort Hood, Texas. An Army psychiatrist was charged with killing 13 soldiers and civilians and wounding more than two dozen others. It was the deadliest in Colorado since the 1999 attack at Columbine High School, where two students killed 12 classmates and a teacher and wounded 26 others before killing themselves.

Complete coverage of the Aurora, Colo. shooting on CBSNews.com