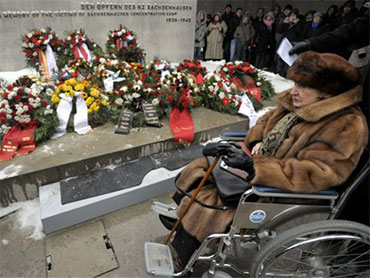 Bundled tightly against the cold and snow, elderly Auschwitz survivors walked among the barracks and watchtowers of Auschwitz and Birkenau on Wednesday, many clad in scarves bearing the gray and blue stripes of their Nazi prison garments decades ago.

Moving later into a heated tent to escape the 14 Fahrenheit temperatures, they heard Israeli Prime Minister Benjamin Netanyahu vow that his country would never allow anyone to erase the memory of the victims of Nazi Germany's death camps.

"We sit in a warm tent and remember those who shivered to death, and if they didn't freeze to death, they were gassed and burned," Netanyahu said in a solemn ceremony marking the 65th anniversary of the liberation of Auschwitz by the Soviet army.

Some 150 Auschwitz survivors and European leaders were on hand for the International Holocaust Remembrance Day ceremony, one of scores around the world marking the global day of commemoration established by the United Nations in 2005.

"From this damned land of Auschwitz and Birkenau and the other death camps rise the voices of millions of our brothers and sisters of our people who were suffocated, burned and tortured in a thousand different and unusual deaths," Netanyahu told the crowd.

After brief remarks in English, Netanyahu switched into Hebrew, saying he wanted to use "the newborn language of the people whom the Nazis sought to exterminate" and chanting the first line of the Jewish prayer for the dead.

"My murdered brothers and sisters and brothers who survived the inferno, I came here today from Jerusalem to say to you we will never forget," Netanyahu said. "We will not allow Holocaust deniers and desecrators of grave stones to erase or distort the memory."

Netanyahu's remarks were a clear reference to Iran's President Mahmoud Ahmadinajad, who has called for Israel's demise and questioned the extent of the Holocaust.

President Obama, in a video message, thanked survivors for finding "the strength to come back again, so many years later, despite the horror you saw here, the suffering you endured here, and the loved ones you lost here."

"We have a sacred duty to remember the twisted thinking that led here - how a great society of culture and science succumbed to the worst instincts of man and rationalized mass murder and one of the most barbaric acts in history," Mr. Obama said.

Mr. Obama also thanked Polish leaders and the people "for preserving a place of such great pain for the Polish people, but a place of remembrance and learning for the world."

Poland's President Lech Kaczynski recalled the pain of the Polish nation, which was occupied by Nazi Germany throughout the war, but also acknowledged the unique suffering of Jews, who were targeted for extermination.

Survivors passed Wednesday under a replica of the infamous sign at the main entrance to Auschwitz, which bears the Nazi slogan "Arbeit Macht Frei" - or "Work Sets You Free."

The original sign but after three days. The thieves had cut the sign into three pieces, however, and it .

Jadwiga Bogucka, an 84-year-old non-Jewish Pole, was sent to Auschwitz in 1944 for taking part in the Warsaw uprising against the Germans. Before the ceremony, she told The Associated Press that Wednesday's weather was similar to that on Jan. 27, 1945, when she woke up and found the Nazis had fled the camp.

"It was all covered in snow and it was very cold. There was no gong as usual for breakfast that morning, but the previous night there had been the usual terror, or even worse - the roll call, the screaming of the SS men," said Bogucka, who was 19 at the time.

"I left the barrack to see what was going on (and) there were dead bodies everywhere, because the Germans had shot anyone still able to move or who tried to flee," she said.

The Nazis opened Auschwitz as a concentration camp in the summer of 1940 after they invaded and occupied Poland. Its first prisoners were non-Jewish Poles and others. Because of its central location, Germany soon turned it into a center for implementing the "Final Solution," the plan to kill Europe's Jews.

By the end of World War II, at least 1.1 million people, mostly Jews, but also non-Jewish Poles, Gypsies and others, had died in the gas chambers at Auschwitz-Birkenau or from starvation, disease and forced labor. Some 6 million Jews overall were killed in the Holocaust.

In other commemorations, German-born Pope Benedict XVI spoke at the Vatican of "the horror of crimes of unheard-of brutality that were committed in the death camps created by Nazi Germany."

Israeli President Shimon Peres addressed the German parliament, calling for the surviving perpetrators of the Holocaust to be brought to justice.

"Across the world, survivors of the Holocaust are gradually departing from the world of the living," Peres said.

"At the same time, men and women who took part in the most odious activity on earth - that of genocide - still live on German and European soil, and in other parts of the world," he added. "My request of you is: Please do everything to bring them to justice."

In Hungary, government officials promised to pursue efforts to criminalize Holocaust denial and drew parallels between the rise of pro-Nazi groups in the 1930s and the current strengthening of far-right parties.

"The struggle against extremists begins with remembrance," said Csaba Molnar, head of the prime minister's office. Historians say about a third of those killed in Auschwitz were Hungarians.