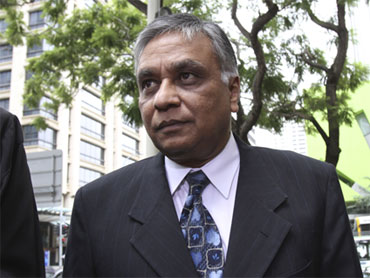 An American doctor accused of repeatedly botching operations and performing surgeries he was not capable of handling pleaded not guilty in an Australian court Monday to three manslaughter charges and one of grievous bodily harm.

Patel's trial at Brisbane Supreme Court kicked off Monday and is expected to include testimony from some 90 witnesses and last four to six weeks. It comes more than 25 years after questions were first raised about his competency, and five years after a government inquiry found he may have directly contributed to patient deaths.

Patel, 59, has not spoken publicly about the charges, which relate to four patients he treated while working as director of surgery between 2003 and 2005 at a state-run hospital in Bundaberg, a sugar industry town 230 miles north of Brisbane in Queensland state. He faces a possible sentence of life in prison if convicted.

Prosecutor Ross Martin spent much of the day delivering a lengthy opening statement that largely focused on the death of one patient, 76-year-old Mervyn John Morris. Morris died two weeks after Patel removed his lower bowel in May 2003 - a procedure Martin said "was the wrong thing to do."

Martin's opening address was packed with complex medical terminology, hospital charts and constant references to doctors' short-form notations, indicating the trial is likely to be a complicated one.

Patel has faced complaints about his competency since the early 1980s, when he practiced in the U.S. In 1984, he was fined by New York health officials and placed on probation for three years for failing to examine patients before surgery.

He later worked at Kaiser Permanente Hospital in Portland, Oregon. Kaiser banned him from liver and pancreatic surgeries in 1998 after reviewing 79 complaints about Patel. The Oregon Board of Medical Examiners later cited him for "gross or repeated acts of negligence."

The doctor arrived to a media throng Monday about 15 minutes before the start of his trial with his wife, Kishoree, clutching his arm. Flanked by his defense team, he refused to answer questions from dozens of reporters. The case has received massive media attention throughout Australia.

Patel is charged with the manslaughter of Morris, James Edward Phillips and Gerry Kemps, and the grievous bodily harm of Ian Rodney Vowles.

In his opening statement, Martin said the fact the patients consented to the operations was irrelevant.

"To put it shortly and crudely, one cannot consent to one's own death or grievous bodily harm," Martin said.

In 2004, Martin said, Patel failed to stop internal bleeding after operating on the esophagus of 77-year-old Kemps, who later died of blood loss. Despite protests from other doctors, Kemps was taken from the operating room and placed in intensive care while Patel undertook another operation.

In another case the year before, Patel found a benign cyst during a colonoscopy of Vowles, but rather than order a biopsy, Patel removed the man's bowel, which later proved to be free of cancer, Martin said.

"It was a useless operation," Martin said, adding Patel "leapt to the conclusion" that Vowles had cancer.

Phillips, 46, died after Patel performed throat surgery. "This is very major and dangerous surgery which should not have been done by him or at Bundaberg Base Hospital," Martin said. "Mr. Phillips never regained consciousness and died two days later."

Beryl Crosby, who runs a support group for those who claimed they were harmed by Patel, was among those at the courthouse.

"We've been waiting a long time for this day to begin," Crosby said outside the courtroom. "It will be justice and some closure."