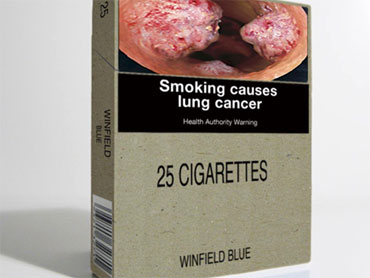 Tobacco companies would be forced to use plain, logo-free packaging on their cigarettes in a bid to make them less attractive to smokers under legislation introduced Thursday by Australia's government, which dubbed the move a world-first.

The rules, which would take effect July 1, 2012, would ban tobacco companies from including logos, promotional text or colorful images on cigarette packages. A government health warning would be prominently displayed instead, with the brand name relegated to tiny, generic font at the bottom.

"The new branding for cigarettes will be the most hardline regime in the world and cigarette companies will hate it," Prime Minister Kevin Rudd said.

The government also announced it would increase the cigarette tax by 25 percent, driving up the price of a pack of 30 cigarettes by about 2 Australian dollars and 16 cents ($2).

Tobacco companies immediately blasted the packaging crackdown, and vowed to fight it in court.

"Introducing plain packaging just takes away the ability of a consumer to identify our brand from another brand and that's of value to us," Imperial Tobacco Australia spokeswoman Cathie Keogh told Australian Broadcasting Corp. radio, adding the company plans to take legal action.

Retailers said the tax hike would hurt their businesses and bolster the cigarette black market.

"It's a lazy policy response being pushed by some health advocates," Mick Daly, National Chairman of Australian supermarket chain IGA, said in a statement. "That amounts to a direct attack on approximately 16 percent of Australians who have made legal and legitimate lifestyle choices."

Tim Wilson, director of intellectual property and free trade at Australia's Institute of Public Affairs, said tobacco companies will likely demand compensation over the forced packaging changes, which could cost taxpayers around AU$3 billion a year.

"Under Australia's constitution, if the government basically takes someone's property rights including intellectual property such as trademarks, or devalues them to a significant extent, they have to provide compensation," Wilson said. "I'd be shocked if they didn't (pursue compensation), because if it happens here, it'll happen all over the world."