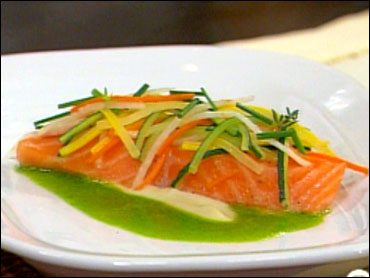 Austrian cuisine is influenced by the countries it is surrounded by: Switzerland, Germany, Italy, Slovenia, Hungary, and the Czech Republic. These neighboring countries added their culinary traditions to the melting pot of Austrian cuisine, but they were not the only ones Bouley writes in his book. "Other influences include Turkish, Alsatian, French, Spanish, Dutch, Bohemian-Moravian, Polish, Croatian, Serbian, and Jewish cuisines."

The book is divided into recipes for the four seasons, signature dishes, and traditional sweets.

The following are recipes he will talk about on Thursday's The Early Show:

Serves 4 as a Main Course

Notes from the Kitchen The apple-rosemary puree is a hidden jewel in this recipe. It has incredible flavor from heating the fresh rosemary sprigs in brown butter before adding the apples. No matter how many times we make it, we never get tired of the moment when the rosemary hits the butter in the pan and releases its scent; it smells so good, you just have to stop for a second and breathe it in. The recipe makes plenty, and the leftovers are divine.

Shrimp with Sweet and Sour Squash and Pumpkin Seed Sauce

Serves 4 as an Appetizer

Notes From the Kitchen The Danube has two sous-chefs named Thomas, both from Austria. So for ease, we call them T1 and T2. T1 is Thomas Mayr; T2 is Thomas Kahl. This dish is T1's brainstorm. He experimented with many different kinds of winter squash to find something dense and sturdy but still sweet and delicate in flavor. Buttercup was the best, but a combination of red kuri or kabocha and butternut was also great. You can use any one of them, though.

Poaching the shrimp in oil, a classic technique, cooks them through without making them rubbery.

Note: To make ginger juice without a juicer, grate peeled fresh ginger into a fine-mesh sieve set over a bowl (or use a piece of cheesecloth). Press down on the ginger (or squeeze the cheesecloth) to extract all the juice.