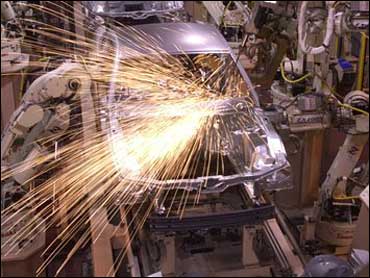 U.S. automakers are hoping to reverse their sliding market share in 2006 with impressive new vehicles and sweeping restructuring plans. But their efforts could be undermined by a host of uncertainties, from the ongoing bankruptcy of auto supplier Delphi Corp. to gas prices and fidgety consumers.

"The market will still be incredibly and blisteringly competitive. Everybody wants to grow and it's got to come out of somebody else's hide," said Jim Sanfilippo, senior industry analyst with Bloomfield Hills, Mich.-based Automotive Marketing Consultants Inc. "Nobody sleeps in this business."

General Motors Corp. Chairman and CEO Rick Wagoner sent a memo to workers in November assuring them bankruptcy isn't an option for the world's largest automaker, but concerns about GM's financial health persist. The company recently announced a plan to cut 30,000 jobs and close 12 facilities by 2008. Next year, it plans to sell a majority stake in its profitable finance arm, GMAC, to raise cash.

Ford Motor Co. is expected to announce its own restructuring plan in January. The nation's No. 2 automaker had its share of turmoil this year, including an expensive bailout for its former parts division, Visteon Corp.

Despite the gloom in Detroit, 2005 will end on a fairly high note. Analysts are predicting full-year sales of around 17 million vehicles, a healthy pace that has held steady over the past six years.

The trouble for the Big Three is that a growing portion of those sales are going to foreign automakers. GM, Ford and DaimlerChrysler AG's Chrysler Group had a combined U.S. market share of 57 percent at the end of November, down from 60 percent two years before. In sales terms, that's as many as 600,000 vehicles lost to competitors such as Toyota Motor Corp., Honda Motor Co. and Hyundai Motor Co.

U.S. automakers hit a home run this summer with discounts that let consumers pay the employee price, leading to near-record sales. But as soon as the discounts expired in October, sales plummeted. GM, Ford and Chrysler have vowed to pull back on incentives, which confuse customers, cheapen brand image and hurt resale value. But analysts say cutting incentives won't be easy as long as U.S. automakers are churning out more vehicles than they can sell.

Automakers also were hurt this year by a dramatic downturn in sales of sport utility vehicles, their longtime cash cows. SUV sales had been falling by 2 or 3 percent in each of the last few years, the victim of changing tastes and a rise in smaller crossover vehicles. But high gas prices accelerated that trend, and sales of large SUVs like the Lincoln Navigator will be off 18 percent this year, Ford's U.S. sales analysis manager George Pipas said.

GM is hoping to halt that slide with a new lineup of full-size SUVs coming out in 2006. GM says its 2007 Chevrolet Tahoe, Cadillac Escalade and other models get 20 miles to the gallon, making them the most fuel efficient in their class.

Ford has high hopes that its Ford Fusion sedan, introduced this fall, will be stiff competition for the 2007 Toyota Camry, due out next year. Ford also has two crossovers in the pipeline. Chrysler is introducing a redesigned Jeep Wrangler as well as the Dodge Caliber, a replacement for the Neon.

In all, automakers will introduce 21 new and 38 significantly redesigned vehicles in 2006, according to J.D. Power and Associates.

Automakers' plans could quickly go awry, however, if workers at Delphi Corp. go on strike. Delphi, which filed for bankruptcy in October, supplies products ranging from satellite radios to steering wheels to every major automaker. Its former parent, GM, is its largest customer.

As part of its restructuring, Delphi has asked its unions to reduce hourly workers' wages by more than 60 percent. The United Auto Workers, which represents the bulk of Delphi's 34,000 North American hourly workers, has rejected that request.

If it can't get an agreement to lower wages, Delphi has said it could ask a judge to void its union contracts by Jan. 20, an action that could lead to a strike. The UAW's chief Delphi negotiator, Richard Shoemaker, recently told union officials that a strike "appears more likely than not."

The Delphi offer was one of a string of blows to unions this year. In October, the UAW agreed to a deal with GM to make active and retired employees pay more for their health care. Ford and Chrysler are now negotiating similar agreements.

The turmoil paves the way for contentious negotiations in 2007, when the UAW's contract with the Big Three is scheduled to expire.