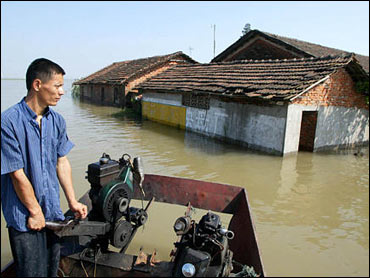 More than a million people have been mobilized to shore up dikes around Dongting Lake in densely populated Hunan province, the official Xinhua News Agency said. Rising waters already have swamped towns on the lakefront.

A quarter-million people are being evacuated from around China's swollen Dongting Lake as it threatens to engulf millions, but officials see signs of winning the battle against time.

Elsewhere, the Yangtze River in central China has passed flood levels in some areas and a river has surged past the danger mark in Guangdong province in the southeast, which borders Hong Kong, according to state media and a local official.

Nearly 1,000 people have been reported killed by flooding and landslides since China's summer rainy season began in June. More than 200 of those deaths were reported in Hunan.

No one has yet perished on the shores of the lake, top flood control officials said on Friday.

"There's a lot of water coming in and not a lot going out," Zhang Shuofu, director of Hunan's flood control office, said of the lake.

"But because of the steps we've taken since 1998, we've been able to successfully fight back the waters," said Yu Changming, Hunan's number two flood control official, as a flood crest, due to hit Dongting on Sunday, swept down the Yangtze River.

The lake is at its highest since 1998, when China's worst floods in decades killed 4,000 people.

Since then, embankments and dykes have been reinforced at huge cost, making the body of water the size of Luxembourg less susceptible to floods, the officials said.

Yu said on a perfect summer's day of warm sunshine and blue skies that the lake's water levels were expected to begin receding by Monday or Tuesday if there was no more rain.

The China Daily quoted the Ministry of Civil Affairs as saying 27,000 houses had collapsed and one million acres of crops were damaged in Hunan, but it did not specify where.

Dongting, which covers 1,000 square miles, has been rising an average one-and-a-half feet a day this week and was nine feet above its flood warning level on Friday morning, another flood control official said.

According to the official, the waters on Dongting had reached 114 feet.

That is still more than three feet short of the lake's historical high of 118 feet in 1998.

Chinese Red Cross officials in Hunan are appealing to other regions of the country for tents, food and other supplies, said France Hurtubise, the Beijing-based regional spokeswoman for the International Federation of the Red Cross.

Beijing requires governments in flood-prone areas to keep emergency supplies on hand. But Hurtubise said Red Cross warehouses in Hunan are running low after efforts to help 100,000 people displaced by flooding in June.

"There is an emergency to replenish the supplies to help new victims," she said.

The provincial government was preparing for the worst, clearing roads so that relief goods, such as tents for those driven from their homes, could get through, state media said.

The economic impact of more than a week of torrential rain is already evident in China's top rice-growing province. Analysts have already cut estimates of the country's rice crop this year.

The biggest danger is from the Xiangjiang, which flows through Changsha. It is now more than six feet above its flood-warning levels for the first time on record and still rising.