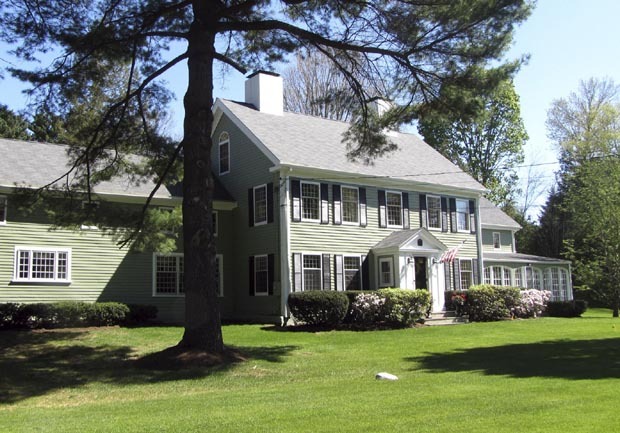 (AP) SUDBURY, Mass. - The suburban Boston home where Babe Ruth lived after he had been sent to the New York Yankees is for sale, and the asking price is more than Ruth made in his entire playing career.

The estate known as Home Plate Farm in Sudbury, Mass., is on the market for $1.65 million.

Ruth, who for decades held the major league career home run record with 714, lived in the home from 1922 to 1926, according to broker Scott Adamson, of Coldwell Banker Residential brokerage.

"This is a great old antique house," Adamson said Monday, estimating the home dates to about 1800. "It's got a ton of modern features, but I think Babe Ruth would still recognize it even today because it retains many of the original features."

The former home run king is still a major draw among collectors and baseball buffs: An Iowa family's collection of baseballs signed by Ruth just before he died recently sold at auction for more than $200,000.

The 5,000-square-foot, five-bedroom, 3 1/2-bathroom home on a two-acre plot has undergone extensive renovations since the 1920s, including "a chef's dream kitchen, richly detailed family room, a sunny master suite with vaulted ceilings" and more, the listing says.

But some of Ruth's personal touches remain. One room even has burn marks on the floor where Ruth is said to have flicked his cigar ashes, Adamson said.

The property also includes a 5,000-square-foot barn with stables, office space, garage bays and a one-bedroom apartment with a full kitchen and bathroom.

The home is not far from Willis Pond, where the remains of a piano that reportedly once belonged to Ruth is thought to be submerged. Legend has it that Ruth, who rented a hunting cabin on the pond, pushed an upright piano onto the ice one winter during a party, then left it there until the ice melted and piano plunged into the water.

"This is truly a one-of-kind opportunity to own a piece of history," Adamson said.

The current owners have lived in the home about 20 miles west of Boston for nearly 30 years and are "moving on," Adamson said.

The only drawback may be the occasional baseball fan who stops by to take a look, said Aglaia Pikounis, a spokeswoman for Coldwell Banker's parent company.

On Friday, eight balls signed by Ruth during a 1948 trip to a Ford dealership in Spencer, Iowa, sold for just over $216,000, Heritage Auctions director Chris Ivy said. One ball in near-mint condition went for $77,000, while two others sold for just over $13,000.

The family of dealership owner John Hart kept eight of the dozens of balls Ruth signed in a safe deposit box for more than six decades until deciding to put them up for auction.