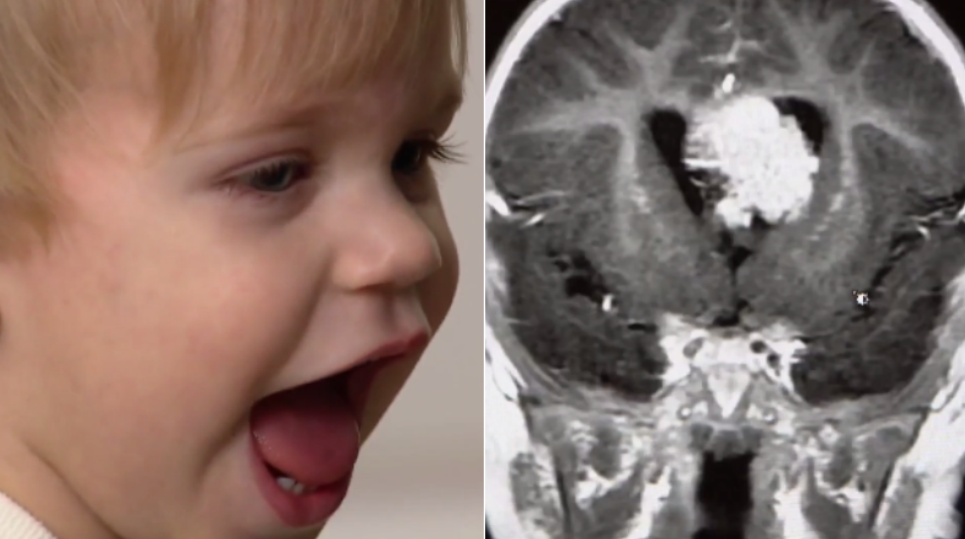 As a first-time parent, Edward Kaczmarek panicked when his 9-month-old son, Giovanni, took a tumble off a changing table in April.

Kaczmarek and his wife, Agata, didn’t hesitate to rush their blond-haired, blue-eyed little boy to the emergency room for tests.

But it turns out the accidental fall was a blessing in disguise. If it hadn’t happened, he never would have gotten a head CT scan that revealed a golf ball-sized brain tumor his parents had no idea existed.

“If he hadn’t fallen, it wouldn’t have shown symptoms for quite some time, possibly until it was too late to remove completely,” Dr. Bryan Bertoglio, a pediatric neurosurgeon at Alexian Brothers Medical Center in Elk Grove Village, Illinois, told CBS Chicago.

The Kaczmareks learned of the devastating diagnosis as the family was expecting their second child, Leonardo.

“There might have been that chance that I’d be very well welcoming a child and losing one,” Kaczmarek said.

Giovanni needed surgery to remove the tumor, and he needed it fast. Bertoglio suggested taking a non-invasive approach, using BrainPath — a new type of technique created by the Neurosurgical Intervention Company (NICO), which allows doctors to navigate through the folds and fibers of the brain with an opening the size of a dime.

The Kaczmareks agreed, and Giovanni became only the third child in the U.S. to undergo the procedure.

“He was home a couple of days later, as if nothing had happened,” Bertoglio told CBS Chicago.

He “could have [died]” if the tumor had grown, Bertoglio said. Luckily, that didn’t happen, and Bertoglio does not think the tumor will return.

Now 17 months old, Giovanni is back to playing with blocks and learning how to be a big brother.