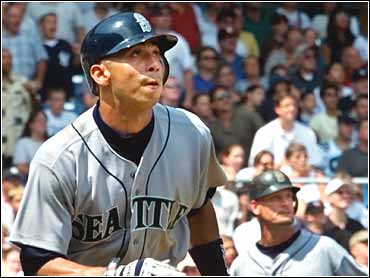 The Seattle Mariners left Yankee Stadium in a much better mood than when they arrived.

Carlos Guillen hit his first career grand slam as Seattle beat up on the New York Yankees for the third straight game, 8-5 on Monday.

The Mariners were delayed getting to New York because of storms in the area on Thursday night and went out and lost the opener 13-6 in an ugly game. Seattle then outscored New York 25-11 to win the final three games.

"It was good to come into Yankee Stadium and get three out of four," manager Lou Piniella said. "This is not an easy place to come in and play at especially after losing the first one. It was a good win for us."

John Halama (10-5) allowed three solo homers two to David Justice but little else as the AL West-leading Mariners took three of four against the AL East leaders in a potential playoff preview.

The Yankees, who acquired Jose Canseco from Tampa Bay in a waiver claim before the game, had been undefeated in 10 straight series since Justice joined the team from Cleveland on June 30. But the New York Mets were the only team they played in that stretch with a winning record.

Seattle leads Oakland by 3 1/2 games in the AL West, while the Yankees entered the night with a three-game lead over Boston in the East.

"We're malfunctioning right now," Yankees manager Joe Torre said. "We need to get back and establish our pitching again. The only good thing is that we've maintained our lead throughout this hole thing."

Alex Rodriguez and Jay Buhner also homered for Seattle. The Mariners have won five of seven against New York this season after losing 17 of 21 matchups the past two seasons.

Just like the past two days when they battered David Cone and Orlando Hernandez, the Mariners had little trouble against Denny Neagle (2-2).

Rodriguez broke a 2-2 tie in the fifth inning with a solo homer, his 28th. Seattle broke the game open in the sixth.

Buhner, who went 4-for-5, led off with a single and went to second on David Bell's one-out hit. With two outs, Rickey Henderson drew his second walk of the game the 2,036th of his career (26 behind Babe Ruth's career record) to load the bases.

On a 3-2 pitch, Guillen hit a drive that just cleared the right-field fence and was just inside the foul pole to give Seattle a 7-2 lead.

"I knew (Paul) O'Neill was going to catch that ball," Rodriguez said. "The son of a gun catches everything. It was great to see that ball go out. I was surprised he didn't catch it and I was surprised it stayed fair."

After Glenallen Hill's fourth homer for New York brought the Yankees within four, Buhner hit his 21st homer to make it 8-3 in the seventh off Dwight Gooden.

Halama, who had given up one home run to a left-handed hitter in 116 at-bats coming into the game, allowed solo shots to Justice in the second and fourth innings.

With one out in the sixth, Halama threw a pitch behind Justice, who appeared agitated as he discussed it with home umpire Mark Carlson. On the next pitch, Justice stepped away from the plate as Halama threw and fouled it off.

Halama, born in Brooklyn, N.Y., had little other trouble in his first career start at Yankee Stadium. He allowed four runs and nine hits in 6 1-3 innings.

"I was just up a little bit on a couple of those guys," Halama said. "That's why they hit the home runs. The ball was really carrying."