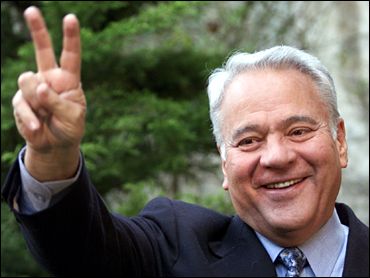 Sanchez de Lozada, a centrist mining executive who was president from 1993 to 1997, won a congressional vote by a 84-43 margin over Evo Morales, the radical Indian leader of Bolivia's coca growers.

The two men were the leading vote-getters in a national election in June. Neither won an outright majority, forcing a runoff in Congress.

Two congressman left their votes blank, while 26 votes were nullified. Two other legislators were apparently absent.

The legislature convened Saturday and debated through the night for more than 24 hours. All 157 members gave a speech, with some wearing multicolored Indian clothing and speaking in indigenous languages. Others chewed coca leaf, the base material of cocaine but also an important part of centuries-old Indian culture in the Andes.

Sanchez de Lozada ensured his victory in the legislative vote more than a week ago by securing an alliance with his rival, leftist former President Jaime Paz Zamora.

He will govern South America's poorest country, which is suffering an economic crisis, rising crime and social unrest.

Known by the nickname "Goni," Sanchez de Lozada spent most of his youth in the United States and still speaks Spanish with an American accent that is often the brunt of jokes among Bolivians. He grew up in Washington, where his father was a diplomat, and later studied philosophy and English literature at the University of Chicago.

Sanchez de Lozada will face an opposition galvanized by the blunt-talking Morales, whose Movement to Socialism party has given Bolivia's downtrodden Indian majority an unprecedented political voice.

Morales's party took 35 seats in the legislature and may ally itself with Indian leader Felipe Quispe's bloc of six congressmen. Sanchez de Lozada's Nationalist Revolutionary Movement party won the most seats with 50, but did not get a majority in the 157-seat legislature.

Morales's supporters gave divisive speeches during the congressional debate. "One candidate represents the oppressed of the countryside. The other represents the businessmen who oppress us," Quispe said.

Many of Sanchez de Lozada's supporters spoke briefly, saying they were voting for unity.

Congressman Mario Cosio said he chose Sanchez de Lozada to "construct one Bolivia, where unity, tolerance and coming together are put above resentment and differences."

Morales, the 42-year-old son of Aymara Indian shepherds, placed a surprise second in June, stunning observers and rattling Bolivia's ruling elite that is comprised largely of European-descended and mixed-blood politicians and businessmen.

A fiery protest leader, Morales has organized sometimes violent demonstrations and highway blockades by his supporters that have paralyzed parts of the country.

Morales fiercely opposes a U.S.-backed program that has wiped out most of Bolivia's coca plantations while Sanchez de Lozada has vowed to continue the eradication effort. Washington heralds the program as a shining success in its war on cocaine, but eradication has been highly unpopular and led to deadly clashes between farmers and security forces.

Sanchez de Lozada will inherit a gaping budget deficit after his predecessor Jorge Quiroga spent heavily while trying to spark the sluggish economy back to life.

Sanchez de Lozada has promised to create jobs urgently with public works projects and to provide up to 800,000 fellowships for poor students. The main legacy of his first presidency was a "capitalization" program that partially privatized many of Bolivia's state-owned industries. He is also credited with increasing public financing for the country's long-neglected municipalities.

He will be inaugurated for a five-year term on Tuesday. In a possible sign of things to come for the new leader, a national teachers union has announced a strike for the same day.