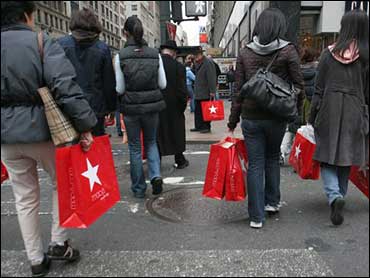 It's holiday shopping – part two. The stores were packed again Monday, this time with shoppers exchanging gifts and looking for bargains.

Dec. 26 is becoming one of the biggest shopping days of the year, and one of the most challenging for retailers. It's also becoming increasingly more important to their bottom lines.

Retailers expect a lot of the merchandise they sold before Christmas will be returned.

Turns out one in three gifts opened on Sunday is headed back to the store some time soon, CBS News correspondent Sharyn Alfonsi reports.

If the parking lots at suburban malls or city streets are any indication, a lot of people were out shopping Monday. But analysts say don't be fooled: more people seem to be browsing than buying.

Retail analysts like Vera Gibbons are projecting Holiday Sales to be up 3 percent over last year. Hardly, the 6 percent jump some retailers were predicting just two months ago.

"Consumers have a lot on their mind – rising interest rates, a cooling housing market. They're riddled with debt and the holiday season thus far is shaping out to be just okay, not exceptional, not terrible but okay," says Gibbons.

And it won't be easy on for shoppers either.

The return polices have gotten even stricter this year; many stores are now watching what you bring back.

"Every time you make a return they swipe your license and if you make too many returns that return is denied," says Gibbons. "They are very secretive about how many returns you can make before they say no, no, no."

Even non-serial shoppers could pay. For the first time, a number of big retailers are charging customers a "re-stocking fee" to return gifts. Usually, it's about 15 percent of the purchase price, meaning you might actually have to pay to get rid of that bad sweater you got this year.

At Macy's Herald Square in New York, shoppers were out at 6 a.m. looking for post-Christmas discounts.

"I think it is a little crazy, but it's a lot of fun. It's sort of like a one-day kind of thing, kind of like the way guys go to soccer games. We do the day-after-Christmas," said a woman.

Ann Murray of Tolland, Conn., found a $10 sweater, a two-piece suit for $30 and a matching top for $6. "At this price, you can throw them away and not take them to the dry cleaners," she said.

Also at the Buckland Hills Mall was Laura Snyder, who was visiting from Maryland. She returned a pocketbook and outfit that she received as gifts from her children. She said she would look for good prices on Tommy Hilfiger and Polo brands. "I shop for myself after Christmas, never before," she said.

Meanwhile, at a Wal-Mart store in Durham, N.C., Elizabeth Jones, 28, of Chapel Hill, waited in her car Monday for the 6 a.m. so that she'd have the best selection of wrapping paper, ribbons and other package decorations.

"I have a wrapping fetish, and so I always come out the day after Christmas so I can stock up for next year," she said. Jones said she had some store gift cards to redeem, but didn't plan to use them Monday.

John Barbee, 55, of Durham, said he was hunting for good deals and may scout out gifts for next year.

"I always shop early," he said. He left the store with $151 worth of holiday decorations, Christmas cards and a makeup kit likely to become a gift for a granddaughter.

Michael P. Niemira, chief economist at the International Council of Shopping Centers, expects the week after Christmas will be "big." But he still believes that merchants will wind up with a modest 3 percent to 3.5 percent sales increase for the November-December period.

The estimate is based on same-store sales, which are sales at stores opened at least a year. But Niemira added that if more shoppers than expected redeem their gift cards this week, that could boost December sales by 0.75 percentage point.

Niemira expects that 20 percent of gift card holders will redeem their cards this week. There's motivation to spend it soon. While many stores have been loosening up the restrictions on when shoppers can use the card, consumers still face fees and expiration dates from some, particularly for gift cards issued through national banks.

According to ShopperTrak RCT Corp, the week after Christmas accounted for 10 percent of holiday sales last year, but analysts expect that period could account for as much as 14 percent, given gift cards' soaring popularity.

The National Retail Federation estimates that consumers will spend $18.48 billion on gift cards, this holiday season, up 6.6 percent from a year ago, based on a survey conducted by BIGresearch.