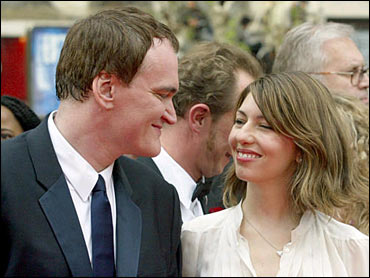 Pedro Almodovar reveled Wednesday in his gig as opening act at the Cannes Film Festival, saying he felt like a puppetmaster about to draw back the curtain on a 12-day burst of cinema.

The writer-director, who won Academy Awards for his last two films and took the directing prize at Cannes in 1999 for "All About My Mother," is not competing for Cannes honors this time. "Bad Education" was screening outside the festival's main competition of 19 films, but Almodovar said he felt like a winner, anyway.

"I'm not in competition this year to win a prize," Almodovar said at a news conference before the festival began. "To play the part of the person who opens the curtain is, as I say, a prize in itself. So what I feel is enormous joy."

Another Oscar-winning filmmaker - Quentin Tarantino, who heads this year's Cannes jury - joined Almodovar to officially open the festival Wednesday night. The festival runs through May 23.

"Cinema, mon amour (Cinema, my love)!" Tarantino declared during the opening ceremony, which featured a montage from his films, including "Reservoir Dogs," "Pulp Fiction" and "Jackie Brown."

Almodovar told the opening-night crowd he was dedicating the movie to victims of the March 11 train bombings in Madrid, which killed 191 and wounded more than 2,000.

Tarantino, an Oscar winner for the screenplay of 1994's "Pulp Fiction," also is represented on screen at Cannes with a special showing of "Kill Bill - Vol. 2," the conclusion to his vengeance saga starring Uma Thurman.

"For me, as a cinephile since as far back as my memory goes back, to me, Cannes is heaven," Tarantino said earlier in the day. "If you love cinema, this place is just heaven."

Tarantino said his dream was to have his first movie play at Cannes, which happened with his crime tale "Reservoir Dogs." His next dream was to win the top Cannes prize, which he achieved with "Pulp Fiction." Next, his dream was to serve on the Cannes jury.

"Then I was made the president of the jury," Tarantino said. "So if there's another level above heaven, all right, that's where I'm at."

Along with "Bad Education," 12 other high-profile films are being shown at the festival but not competing for prizes. Among them are Brad Pitt's ancient Greece epic "Troy," the zombie remake "Dawn of the Dead," Billy Bob Thornton's holiday comedy "Bad Santa" and Kevin Kline and Ashley Judd's "De-Lovely," a music-filled portrait of composer Cole Porter that is the festival's closing film.

Almodovar, who won the original-screenplay Academy Award with 2002's "Talk to Her" and the foreign-language Oscar with "All About My Mother," says he spent more than 10 years working on the screenplay for "Bad Education."

The film stars Gael Garcia Bernal and Fele Martinez in the story of a director making a film about his first love, an old chum at the Catholic school they attended as boys.

The movie's film-noir twists include a reimagining of the two boys as adults, one becoming a transvestite trying to blackmail the priest who sexually abused him.

The Catholic church has been stung by revelations of widespread molestation of boys by priests. But Almodovar said "Bad Education" was not intended as a church-bashing film.

"Bad Education" opened in March to solid box-office numbers in Spain and is rolling out to other European countries through the end of the year, when it debuts in U.S. theaters.

Cannes jury member Benoit Poelvoorde, a Belgian actor who co-wrote the cult serial-killer flick "Man Bites Dog," provided some opening-day levity with a lighthearted rant at a news conference with Tarantino and other jurors, who include actresses Kathleen Turner, Tilda Swinton and Emmanuelle Beart.

Films in the festival's main competition include the animated sequel "Shrek 2"; the Coen brothers' crime romp "The Ladykillers"; Wong Kar-wai's time-bending tale "2046"; "The Life and Death of Peter Sellers," starring Geoffrey Rush as the late comic actor; and "Fahrenheit 9/11," a critique of the Bush administration's actions after the Sept. 11 attacks from filmmaker Michael Moore ("Bowling for Columbine").

Moore, despite his fame, is in the same boat as many lesser-known filmmakers at Cannes who are at the festival hoping to line up a distributor.

Moore has twice lost distribution deals for "Fahrenheit 9/11" - which was originally partnered with Mel Gibson's Icon Films, and then teamed up with Disney-owned Miramax.

Things are looking up for Moore, however. As luminaries gathered at Cannes Wednesday, word came that Miramax chiefs Bob and Harvey Weinstein plan to buy the film themselves and then sign up a distributor.