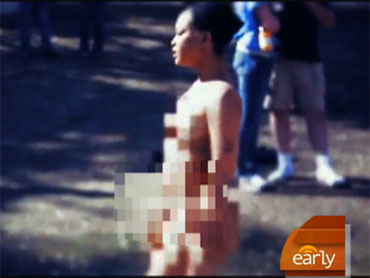 A music video that depicts R&B star Erykah Badu walking and stripping naked on a downtown Dallas street is drawing criticism from officials in her hometown.

The video of the Badu ballad "Window Seat," which was recorded earlier this month, shows Badu walking in front of the Texas School Book Depository, from which President John F. Kennedy was fatally shot in 1963. As she does, she strips nude and is "shot down" near where Kennedy was shot.

On her Twitter feed, Badu says the video "was shot guerrilla style, no crew, 1 take, no closed set, no warning, 2 min., downtown dallas, then ran like hell."

"When it first happened," says eyewitness Mike Brownlow, "people thought something had happened to her. We didn't know why she was laying on the sidewalk."

City spokesman Frank Librio says her crew never applied for required permits. He says "guerrilla" film crews who "usually shoot these scenes in one take know that, if they are discovered, they would face arrest and/or penalties."

Had they caught her, says CBS News Correspondent Don Teague, she could have been charged with indecent exposure.

One passerby says it's even more indecent to do such a thing where she did it. "I was thinking about going down there and whoopin' her," says Rebecca Lewis, "but i was on the phone with the police, too. I called the police. … I was very offended. There were too many kids, women, and children down there."

Badu tweeted to her fans, "There were children there. I prayed they wouldn't be traumatized."

She says the video was an attempt to protest the term "groupthink," which describes when a person is afraid to express him or herself for fear of being ostracized by the wider public -- a fear, Teague observes, she's "clearly trying to conquer."