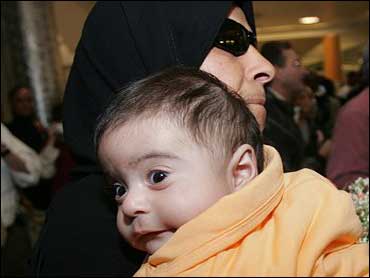 An Iraqi infant brought to Atlanta for treatment of severe birth defects is described as "interactive and playful" by her doctor.

Doctor Roger Hudgins, a pediatric neurosurgeon, tells The Early Show that despite her upcoming surgery, it's not likely that three-month-old Baby Noor al-Zahra will ever be able to walk.

"There's just not that much function in the lower extremities," he said.

Baby Noor has a form of spina bifida, a birth defect that kept her spinal column from closing and Iraqi doctors had no answers.

Hudgins and Children's Healthcare of Atlanta will treat the baby's complications free of charge.

"The chances of her survival are hopefully good, yes," he told CBS News correspondent Mark Strassman.

In a week, the baby girl will undergo the first of at least two life-changing surgeries.

"The first surgery is to close the back, and fix the defect," Hudgins said.

The doctor says the surgery is "moderately complicated."

"If done in the first day or two of life, it's a relatively straightforward operation," Hudgins said. "In this situation where time has passed, it's going to be difficult to find the anatomic landmarks, but I think it can be done."

Soldiers with the Georgia National Guard found the baby three weeks ago during a house raid in Abu Ghraib, a poverty-stricken district west of Baghdad. Her grandmother thrust the child toward the soldiers, pleading for help.

PFC Justin Donnelly was the first to assess the baby's condition.

"At first I saw the tumor and thought it might be some kind of cancer she was born with. I took a picture of it and and brought it back to show to my chain of command to see if there was anything we could do to help this little girl who was born with this unfortunate condition," he said.

They later learned the baby had spina bifida. The growth on her back was a fluid-filled sac containing part of the spinal cord.

Over time, Noor got a visa, a plane ticket to Atlanta, a second chance at life.

"It's really gratifying to know that my action and the actions of my platoon and unit could help this little girl, give her the medical attention she needs," Donnelly said.

Their help was saluted by the baby's newest American protector.

"These are good guys. They went out of their way to make this happen. It's an honor for us to be able to do this," Hudgins said.

Asked why they reached out, the soldiers said nothing is more important than helping a child.

"This is how we're going to win the war on terrorism. One child at a time, one family at a time and one community at a time," Sonen said. "This is what America does best. We help people."