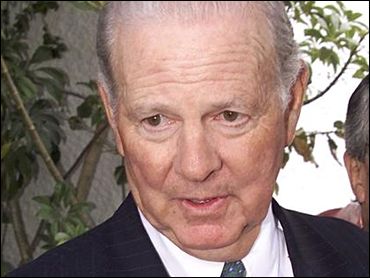 President Bush on Friday named former Secretary of State James A. Baker III his personal envoy to Iraq on the issue of Iraqi debt.

"Secretary Baker will report directly to me and will lead an effort to work with the world's governments at the highest levels with international organizations and with the Iraqis in seeking the restructuring and reduction of Iraq's official debt," the president said in a statement read by White House press secretary Scott McClellan.

As the president's personal envoy, reports CBS News Correspondent Peter Maer, Baker will lead a worldwide effort for the restructuring and reduction of Iraq's debt. A White House spokesman said Iraq "should not shoulder" the debt used by the Saddam Hussein regime to "build palaces, torture chambers and mass graves."

Iraq's huge debt, with annual servicing charges of $7 billion to $8 billion, is seen as a major impediment to reconstruction.

Mr. Bush said he made the appointment in response to a request by the Iraqi Governing Council.

"The future of the Iraqi people should not be mortgaged to the enormous burden of debt incurred to enrich Saddam Hussein's regime," Mr. Bush said in the statement. "This debt endangers Iraq's long-term prospects for political health and economic prosperity. The issue of Iraq's debt must be resolved in a manner that is fair and does not unjustly burden a struggling nation at its moment of hope and promise."

In addition to serving as secretary of state in the first Bush administration, he was treasury secretary and chief of staff under President Ronald Reagan.