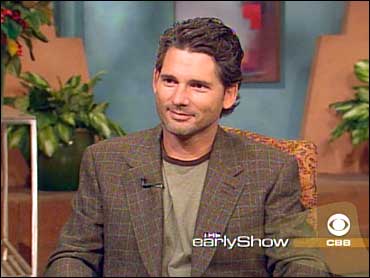 Every actor wants to be noticed by Steven Spielberg, but Eric Bana couldn't have predicted that his 2003 role in "Hulk" would lead this year to a part as an assassin in the controversial but critically acclaimed new drama "Munich."

Bana talked to The Early Show anchor Harry Smith about his role as one of a group of professional assassins assigned to track down the Arab terrorists behind the murders of 11 Israeli athletes and a German policeman inside the 1972 Olympic Village in Munich, Germany.

The actor was on the other side of the world in Melbourne, Australia, when that event occurred, and he was only 4 years old.

But the movie Munich begins with that terrible event, he notes, "and then follows the story of what happened after that."

Based on the book "Vengeance" by George Jonas and directed by Spielberg, the movie follows the story of five assassins assigned to find the people responsible for the attacks.

"Myself and a group of four other gentlemen, played by an incredible bunch of actors, of course, go off and track down, hunt and kill the people responsible for the attacks," Bana says. "And that's basically what our movie is about."

This is no comic book action movie. Both the assassins and their targets are portrayed as flesh-and-blood people. The hunters try to lure their targets by setting themselves up to be hunted, and "that's where the film starts to kick into another gear," Bana says. "The paranoia and anxiety levels come up in the group. But that definitely ratchets up the drama."

That anxiety level is definitely conveyed to the audience, which is left wondering if the cycle of violence has any end.

In one chilling scene, he is told to kill a KGB contact because he is even worse than the KGB contact he replaced after Bana's character assassinated him.

"I read that and thought, that's a really uncomfortable notion," he says. "Even if you are getting these guys, if they are being replaced by worse, is what you are doing even worthwhile? It's a pretty challenging thing, I think."

The actor started his career as a comedian and went to drama school in Australia before his big international break in Black Hawk Down in 2001. He also appeared in "Troy" in 2004. But it was his role in "Hulk" that caught Spielberg's eye.

"You could deliver a performance that's more showy or more in-depth or whatever, but it's a good lesson," he says. "You never really know who is watching and what they are taking out of it, and whether it's good or bad. I'm really glad I did that film if it got me this role."