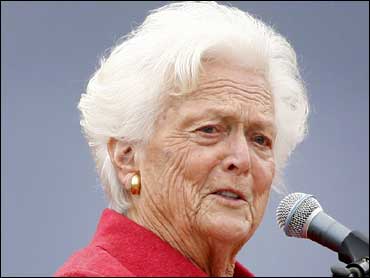 In an interview with CNN's Larry King scheduled for airing Monday, Mrs. Bush says she sat next to Palin once and "thought she was beautiful."

The outspoken wife of former President George H.W. Bush says Palin, who is considering a presidential run in 2012, seems "very happy in Alaska" but then adds, "I hope she'll stay there."

In an excerpt provided by CNN, both Bushes compliment their son, former President George W. Bush, on the success of his recent memoir, "Decision Points."

The former president says his son has "done a good job selling the darn thing."

Palin, too, is promoting a new book - "America by Heart: Reflections on Flag, Faith and Family" due out Tuesday. That, as well as her new reality show "Sarah Palin's Alaska" and her daughter Bristol competing on "Dancing with the Stars," has kept the former Alaska governor in the media spotlight without necessarily talking politics, reports CBS News White House correspondent Bill Plante.

"This is a way to have some of the attention without really having big criticism," said Politico.com's Karin Tanabe

Palin's book tour will take her to key presidential battleground states like Iowa and South Carolina for the run-up to the 2012 presidential elections.

Palin has indicated a willingness to run for president and in an interview with ABC News' Barbara Walters last week, Palin said she believes she could unseat President Barack Obama.

In excerpts of the book leaked on Gawker, Palin largely talks about pop culture - praising films like "Knocked Up" and "Juno" while criticizing reality TV shows like "American Idol."

But one political target is First Lady Michelle Obama. Palin revisits comments Mrs. Obama made during the 2008 presidential campaign that the support for her husband made her proud of her country for the first time in her adult life.

""I guess this shouldn't surprise us" Palin writes, "since both of them spent almost two decades in the pews of the Rev. Jeremiah Wright's church listening to his rants against America and white people."

The book's publisher is now suing Gawker, which has since taken them down from the site under court order.