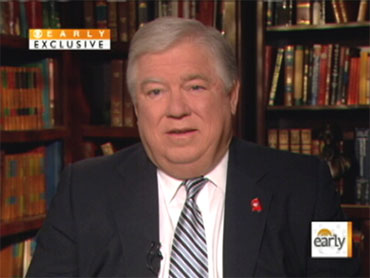 The chairman of the Republican Governors Association said that while he expects big wins for his party on Election Day, he understands it is not because voters love the GOP more than the Democrats.

Appearing on CBS' "The Early Show" this morning, Mississippi Governor Haley Barbour said that tomorrow's voting represents a referendum on the policies of President Obama.

"The American people do not like Obama's policies," Barbour told anchor Harry Smith. "They don't like all of this outrageous spending. They don't like running up the deficits. They don't like piling trillions of dollars of debt on our children and grandchildren, and they don't think it works. They think it's been bad for the economy, that it has made it harder to create jobs.

"We have to understand they're not saying 'Hey, we love you Republicans,' but, 'We're not satisfied with this and will give you guys a chance,'" Barbour said.

Smith alluded to an opinion piece by pollster Scott Rasmussen in the Wall Street Journal which states that any Republican gains represent a voting-out of the party in power, as happened in 1994 and 2006.

"In this environment, it would be wise for all Republicans to remember that their team didn't win, the other team lost," Rasmusseun writes. "Heading into 2012, voters will remain ready to vote against the party in power unless they are given a reason not to do so."

After the Republicans took over Congress in the 1994 election, the GOP leadership shut down the government in a power struggle with President Clinton. "Some people would say that didn't end so well for the Republicans, especially with the stalemated government," said Smith. "Have you any concerns that that might happen again?"

"Well, I think it's very likely," Barbour replied, but added, "it's going to be up to the president. I think the Republicans are going to hear the people very plainly - cut out all this spending, don't raise our taxes, focus on job creation, economic growth. What's the president going to hear? And I can't answer that."

When asked by Smith what promise the GOP can make to voters, Barbour said Republicans are going to cut spending.

"One of the promises is they are going to cut $100 billion out of the budget this first year," Smith said. "Is that possible?"

"Harry, $100 billion is less than 3 percent of the federal budget. In Mississippi our appropriations this year are 13.3 percent below where they were two years ago," Barbour said. "The idea that the federal government can't save 3 percent, the American people know better than that."

But the federal government has played a role in helping Mississippi weather those budget cuts.

Eighty-nine school districts in Mississippi have raised local property taxes $15.1 million, to make up for cuts in the money coming from the state capital to communities.

Cuts were also made in services for the elderly, as well as mental health and higher education.

Mississippi has received more than $2.6 billion in federal stimulus funds from the Obama administration's American Recovery and Reinvestment Act. About $1 billion of that was allocated to helping balance the state budget.

While local school districts have received some grants from the stimulus, Barbour has encouraged them not to spend the money, and instead hold it to use after the current fiscal year, when the loss of the stimulus package will make his state's budget woes even more serious.