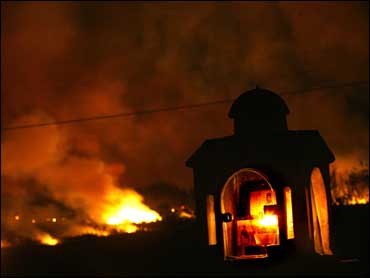 Baseball's operating loss was $232 million this year, including a major league-leading $52.9 million by the Toronto Blue Jays.

While the Arizona Diamondbacks were a success on the field, winning the World Series in just their fourth season, they were a bottom-line bust, with an operating loss of $32.2 million, according to the report.

That was the third-highest operating loss in baseball, trailing only Toronto and the Los Angeles Dodgers ($45.3 million).

Eleven of the 30 teams had operating profits before revenue sharing, led by the New York Yankees at $40.9 million. Seattle was second at $34.3 million, followed by San Francisco at $19 million and Milwaukee at $14.4 million.

After revenue sharing, which redistributed money from baseball's high-revenue teams to low-revenue clubs, nine teams had an operating profit. That was cut to five teams after interest was factored in.

Baseball's operating loss came on record revenue of $3.5 billion. The report showed an additional loss of $112 million in interest costs, which includes borrowing to fund teams' payments for new ballparks.

An additional $174 million was added in amortization — essentially depreciation of a portion of teams' asset value — resulting in an overall loss of $519 million, the report said.

Legislation to eliminate baseball's 79-year-old antitrust exemption was introduced in the House and Senate following the vote by major league owners last month to eliminate two teams before next season.

While no teams were selected, the Montreal Expos and Minnesota Twins are the likely candidates, and Minnesota's congressional delegation pushed for the hearing.

The Yankees paid $26.5 million in revenue sharing, the most of the 30 teams, cutting their operating profit to $14.3 million on revenue of $242 million. They had the highest regular-season gate receipts, $98 million, followed by Boston at $89.7 million.

Baseball's operating loss, while high, was not a record. In 1994, when players struck in August and the World Series was canceled for the first time in 90 years, the sport had an operating loss of $363.7 million, according to recordpreviously obtained by the AP.

In 1995, the first year after the strike, the industry lost $326.3 million on operations, a figure cut to $197 million the following year as business began returning to normal.

Congress, which historically has deferred to baseball owners, is not likely to pass a baseball antitrust bill anytime soon, and President Bush — former controlling owner of the Texas Rangers — hasn't expressed an opinion.

In the meantime, the introduction of the legislation set the stage for another trip to Capitol Hill by Selig, who has clashed with congressmen at several hearings in recent years.

The players' association is often dubious of claims of losses, and union head Donald Fehr is expected to respond to Selig on Thursday in Irving, Texas, where the players' executive board is meeting. While the figures haven't been audited, baseball's early accounting has usually been within 5 percent of the final totals.

"We can argue over the level of detail of the information," Sandy Alderson, baseball's executive vice president of operations, said after the AP obtained the report. "Is it a fair representation of the economic state of the game? I think the answer to that is clearly yes."

Owners want major concessions from the players' union, as they have had in each negotiation since the 1976 labor contract that created the current system of free agency and salary arbitration.

Selig claims the Twins need a new ballpark to survive, but the Minnesota Legislature has failed to support public financing.

Minnesota Gov. Jesse Ventura, who has opposed a publicly funded ballpark but has been more supportive in recent weeks, also is scheduled to testify. The other witnesses are Twins president Jerry Bell and Steve Fehr, the brother of the union leader and a player agent.

Since the 1922 U.S. Supreme Court decision creating the antitrust exemption, Congress has altered it just once. In 1998, lawmakers approved a bill that President Clinton signed that made labor relations of major league players subject to antitrust laws.

But the change meant little because the Supreme Court ruled two years earlier that unionized employees may not file antitrust suits.