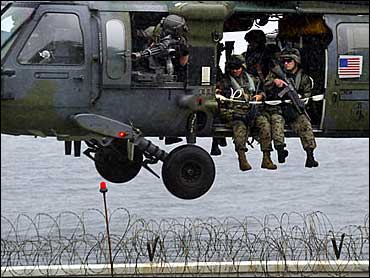 Wailing Liberians lined up bloodied, mangled bodies outside the U.S. Embassy, demanding to know why Washington has not sent troops to end more than a decade of strife in the West African nation founded by freed American slaves.

With more than 360 people injured — some hauled to the hospital in wheelbarrows, others screaming in pain — Monday appeared to be the bloodiest day of fighting in three rebel attempts to take Monrovia in the past two months.

Before the shelling began, American HH-60 Pave Hawk helicopters landed in the U.S. Embassy compound in a driving rain, dropping off about half of a 41-member Marine security team. Dressed in green camouflage, body armor and helmets, they jumped out and ran up a hill.

About 23 foreign humanitarian workers and journalists clutching bags and backpacks ran to the spinning aircraft as Marines and embassy officials shouted: "Go! Go!" Among them were the United Nations' last seven foreign staffers, who had returned to Monrovia just two weeks earlier during a lull in fighting.

Shifting the target of U.S. rhetoric from Taylor to the rebels, spokesman Philip T. Reeker said, "If we're to trust them in the future to participate in the democratic governance of Liberia, we need to be able to see them keep their commitments now."

U.S. officials also announced that 4,500 more American sailors and Marines have been ordered to position themselves closer to Liberia, if needed for an evacuation of Americans, peacekeeping or some other mission.

"We're concerned about our people," President Bush told reporters in Crawford, Texas. He indicated he had not yet decided the size of a U.S. force that might be sent to help a promised West African peacekeeping mission in Liberia.

"I think we can really salvage the situation if troops were to be deployed urgently and promptly," he said.

During 2½ hours of sustained mortar fire, a shell slammed into a U.S. Embassy residential compound where some 10,000 terrified Liberians had taken refuge, killing 25 people, aid workers said. Many more were wounded, including two Liberian embassy guards.

Across the street, in the sprawling embassy complex overlooking the Atlantic, a shell hit the commissary building. There were no reports of injuries.

After the blasts, enraged Liberians dragged bodies from the residential compound and lined them up in front of the embassy, next to a wall emblazoned with the American seal.

"We're dying here," screamed some in the crowd, as two American servicemen in camouflage watched from behind bulletproof glass.

Tom Masland, an American who is Newsweek's African regional editor, was hit in the arm by shrapnel in Monrovia's port area, scene of fierce fighting since Saturday.

Many foreigners evacuated by Marines expressed frustration at having to leave.

"We came in to do a job. We have the ability and resources to do the job. But we don't have the security," said Eleanor Monbiot, of World Vision.

Hundreds of disappointed Liberians stood in the street, many asking when Marines would come to help them.

"What we need aren't those that are just coming to mind American properties, but those who will be deployed on the ground to give us the feeling that peace is really coming," said Moses Smith, 32, who stood in a cluster of people following events on a radio.

West African nations have promised to send more than 1,500 troops to enforce a repeatedly violated June 17 cease-fire. But many in Liberia will be satisfied only by the arrival of U.S. peacekeepers.

"The international community has once again let the people of Liberia down," Information Minister Reginald Goodrich said.

He accused the Liberians United for Reconciliation and Democracy rebel movement of a "very vicious, very murderous" attack.

But Joe Wylie, a rebel delegate at peace talks in Ghana, said the government was also firing shells.

President Bush has said any deployment of U.S. troops is conditional on the departure of Taylor, a former warlord indicted for war crimes in Sierra Leone, where he supported a brutal rebel movement.

Taylor has pledged to resign and accept an offer of asylum in Nigeria — but only after peacekeepers arrive to ensure an orderly transition.

Until then, Taylor has vowed to fight to the last man in Monrovia, his last remaining stronghold after three years of civil war. Rebel groups control most of the country.

Fierce fighting continued Monday in the port area, where government and rebel fighters in jeans and T-shirts traded machine gun and grenade fire along two bridges.

Taylor launched Liberia's last civil war in 1989, emerging in 1996 as the strongest warlord. He was elected president the following year, and now faces rebels who include former rivals from the earlier war.