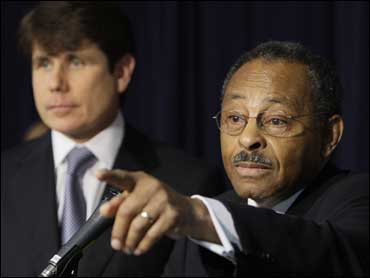 A defiant Gov. Rod Blagojevich on Tuesday named a black political trailblazer to Barack Obama's Senate seat, a surprise move that put the governor's opponents in the uncomfortable position of trying to block his choice from becoming the Senate's only black member.

Blagojevich's appointment of former state Attorney General Roland Burris injected race into the drama surrounding the embattled governor, who repeatedly sought to distance his selection from charges that he tried to sell the seat to the highest bidder.

"Please don't allow the allegations against me to taint a good and honest man," the governor said, turning to the smiling 71-year-old standing by his side.

"This is about Roland Burris as a U.S. senator, not about the governor who made the appointment."

Burris was the first African-American elected to major statewide office in Illinois, serving as comptroller and running for governor three times - the last time losing to Blagojevich.

He said he has no connection to the charges against Blagojevich, who was arrested earlier this month.

Even before the announcement, which was leaked several hours before, the governor's move ran into opposition.

Illinois Secretary of State Jesse White, who must certify the appointment, said Tuesday he will not do so. And Senate leaders reiterated that they would not accept anyone appointed by Blagojevich.

In a statement Tuesday, Senate Democrats maintained that Blagojevich should not make the appointment because doing so would be unfair to Burris and to the people of Illinois.

"It is truly regrettable that despite requests from all 50 Democratic senators and public officials throughout Illinois, Gov. Blagojevich would take the imprudent step of appointing someone to the United States Senate who would serve under a shadow and be plagued by questions of impropriety," the statement said.

"Under these circumstances, anyone appointed by Gov. Blagojevich cannot be an effective representative of the people of Illinois and, as we have said, will not be seated by the Democratic caucus."

"Roland Burris is a good man and a fine public servant, but the Senate Democrats made it clear weeks ago that they cannot accept an appointment made by a governor who is accused of selling this very Senate seat. I agree with their decision," the president-elect said in a statement.

Senate leaders, who were scattered for the holidays, immediately convened a conference call. Some involved in the call were wary of being seen as denying a black man a seat in a chamber where, with Obama's departure, there are no blacks, according to two officials knowledgeable about the talks who requested anonymity in order to speak freely.

"We say this without prejudice toward Roland Burris' ability, and we respect his years of public service," the leaders wrote. But the issue is not about Burris, they said. "It is about the integrity of a governor accused of attempting to sell this United States Senate seat."

Rep. Bobby Rush, an Illinois Democrat who was invited to speak at Blagojevich's news conference, urged Senate leaders not to block Burris. In fact, he almost dared them to try to stop Burris' appointment.

He told reporters that Senate Democrats should not "hang and lynch the appointee as you try to castigate the appointer."

"Bobby Rush didn't play the race card, he dealt the whole deck," CBS News Senior Political Analyst Jeff Greenfield said. "He said, 'How can you not seat the only African American who will be in your body for something he didn't do?'"

Blagojevich was arrested Dec. 9 after federal prosecutors allegedly recorded conversations in which he discussed appointing someone Obama favored in exchange for a position in the new president's Cabinet or naming someone favored by a union if he got a high-level union job.

The governor has faced a flood of calls for his resignation, and the Illinois House has begun impeachment proceedings. He maintains his innocence, and has vowed to stay in office.

Blagojevich's own lawyer said recently that there would be no point in the governor naming someone to the Senate because leaders there would reject his appointment.

Lt. Gov. Pat Quinn said Blagojevich's decision to appoint Burris is an "insult to the people of Illinois."

"We believe in clean government, and Rod Blagojevich has unclean hands," Quinn said.

Republican House Minority Leader Tom Cross compared Blagojevich to "a rabid dog in a corner who's just going to lash out."

Democratic state Rep. Monique Davis of Chicago, a member of the impeachment committee, said Burris' appointment will have no bearing on its decision.

Illinois law gives the governor sole power to fill a Senate vacancy. Lawmakers considered stripping Blagojevich of that power after his arrest but could not agree on legislation - a fact the governor, who had said he would support a bill calling for a special election, pointed out Tuesday.

Blagojevich might have thought he could gain some legal advantage by making the appointment.

"He could think he's gaining leverage - that's not implausible," said Carl Tobias, a law professor at the University of Richmond in Virginia. "He's weaving these legal problems for Illinois, the Senate and the new administration. This is a mess."

White, the secretary of state who handles official paperwork, said he would not formally certify any appointment made by Blagojevich "because of the current cloud of controversy surround the governor."

It's not clear whether White's refusal would be enough to prevent a Blagojevich appointment from taking effect.

While Senate Democrats have threatened not to seat a Blagojevich appointee, CBS News Senior Political Analyst Jeff Greenfield wrote in Hotsheet that Senate Majority Leader Harry Reid and his colleagues may not be able to legally block the appointment.

"In 1969, the Court ruled that the House of Representatives did NOT have the power to refuse to seat Rep. Adam Clayton Powell, Jr., the New York Congressman who was embroiled in a legal case that resulted in a contempt citation being issued against him," Greenfield noted. "The House's power to judge 'qualifications,' the Court said, meant Constitutional qualifications: age, citizenship, that sort of thing."

A senior member of the Senate told CBS News Correspondent Bill Plante, however, that the Senate is the sole judge of who sits in the body and can exclude who it wishes. The member said there is case law supporting that position.

He served as Illinois comptroller from 1979 to 1991 and attorney general from 1991 to 1995. He reportedly expressed interest in Mr. Obama's seat soon after the presidential election, and then stepped up his efforts to secure the appointment following Blagojevich's arrest.

Burris also served as vice chairman of the Democratic National Committee from 1985 to 1989.

More recently, however, Burris has had a string of political disappointments.

He lost campaigns for the Democratic gubernatorial nomination in 1994, 1998 and 2002 - the last time losing to Blagojevich. In 1995, he was badly beaten when challenging Chicago Mayor Richard Daley as an independent.

Burris has been a consistent donor to Blagojevich in recent years.