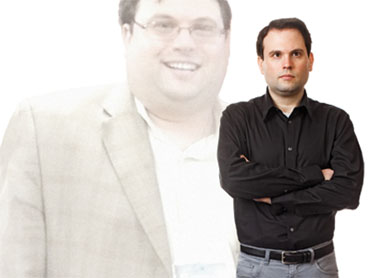 In a cover story for The Atlantic, Marc Ambinder writes about the epidemic of obesity and first lady Michelle Obama's new plan to fight childhood obesity. He also shares the story of his own losing battle to control his weight. Ambinder is the politics editor of The Atlantic and a CBS News political consultant. The following is an excerpt from the article.

In 1948, Congress doled out $5 billion to Europe in the first installment of the Marshall Plan, the World Health Organization was born, a simian astronaut named Albert I was launched into the atmosphere (he died), and doctors in Framingham, Massachusetts, an American everytown that once was a seat of the abolitionist movement, began a pioneering study of cardiovascular disease. Its initial results helped persuade the American Heart Association, in 1960, to push Americans to smoke fewer cigarettes and, a year later, to cut down on cholesterol. Today, thanks to a long-running public-health campaign, Americans have lower blood pressure and cholesterol, they smoke less, and fewer die from cardiovascular disease. In fact, from 1980 to 2000, the rate of deaths from cardiovascular disease fell by at least half in most developed countries.

Would that we had had similar success battling obesity. In 1960, when President-elect John F. Kennedy fretted about fitness in an essay for Sports Illustrated titled "The Soft American," roughly 45 percent of adults were considered overweight, including 13 percent who were counted as obese; for younger Americans, ages 6 to 17, the rate was 4 percent. Obesity rates remained relatively stable for the next 20 years, but then, from 1980 to 2000, they doubled. In 2001, the U.S. surgeon general announced that obesity had reached "epidemic" proportions. Seven years later, as the obesity rate continued to rise, 68 percent of American adults were overweight, and 34 percent were obese; roughly one in three children and adolescents was overweight, and nearly one in five was obese. Americans now consume 2,700 calories a day, about 500 calories more than 40 years ago. In 2010, we still rank as the world's fattest developed nation, with an obesity rate more than double that of many European nations.

For that dubious distinction, we pay a high price. The obese are more likely to be depressed, to miss school or work, to feel suicidal, to earn less, and to find it difficult to marry. And their health care costs a lot. Obese Americans spend about 42 percent more than healthy-weight people on medical care each year. Improper weight and diet strongly correlate with chronic diseases, which account for three-fourths of all health-care spending. Type 2 diabetes is one of the leading drivers of rising costs for Medicare patients, and 60 percent of cases result directly from weight gain. In short, even as the nation is convulsed by a political struggle to "reform" health care, no effort to contain its costs is likely to succeed if we can't beat obesity.

The good news, if you can call it that, is that the rate of increase in obesity in the United States seems to be slowing. The bad news is that no one knows exactly why. And the debate on how to deal with obesity remains frozen. On one side are the proponents of individual responsibility, who believe that fat people suffer from a surplus of self-indulgence and a shortage of willpower. On the other are people who believe that Americans are getting fatter because of powerful environmental factors like cheap corn, fast food, and unscrupulous advertising. Each side is held in political check by the other, and both have advocated unrealistic solutions: diets and exercise programs and miracle drugs that don't work versus massive, and in many cases punitive, government interventions that are politically impossible.

I'm intimately acquainted with the struggle against fat. I may have been skinny as a child-my family used to joke about putting meat on my bones-and I played sports in school, but by the time I was bar mitzvahed, I was overweight. In my 20s, I spent hundreds of hours with personal trainers and diet doctors, and tried virtually every popular diet at least once. Lots of money in the pockets of the gurus; no joy for me. Approaching the age of 30, I passed the nebulous but generally accepted clinical threshold separating the merely overweight from the obese: a ratio of weight (in kilograms) to the square of height (in meters) of 30 or more. (A body-mass index, or BMI, of 18.5 to 24.9 is considered "normal"; from 25 to 29.9 is considered "overweight.") I also developed severe diabetes and sleep apnea. My aching back was the least of my problems.

Perhaps my own losing struggle with weight reflects a failure of willpower. That seems more plausible to me than the argument that I was a helpless victim of Arby's. But most fat people aren't like me: as an upper-middle-class professional, I could draw on plenty of resources in my battle against weight. The people most vulnerable to obesity, however, do not have access to healthy food, to role models, to solid health-care and community infrastructures, to accurate information, to effective treatments, and even to the time necessary to change their relationship with food. And if that is true for fat adults, it is even more true for fat children, many of whose choices are made for them. Their vulnerability to obesity is much more the result of societal inequalities than of any character flaw. Indeed, for all the attention paid to fat's economic costs, the epidemic's toll on children is a stark reminder of its moral dimension. Without some form of intervention, researchers worry, large numbers of black and Hispanic children in the United States will grow up overweight or obese and lead shorter, less fulfilling lives. Is that a legacy we want to live with?

Read the full story at The Atlantic

More from The Atlantic:

The Wrong Man
As the anthrax investigation intensified, the FBI focused increasingly on one suspect: Steven Hatfill. It began a campaign of harassment, intimidation, and 24-hour surveillance. Hatfill lost his job and his friends, fell into a spiral of depression, and found himself utterly isolated. But he was innocent-and here, for the first time, he speaks out.

The Next Empire
From oil in Algeria to zinc in Gabon to copper in the Congo, China is muscling in on natural resources all across Africa on a massive scale. Will it succeed in easing poverty where Western aid has failed? Or will it become the continent's latest colonial overlord?

The Closers
The financial crisis may have eased, but banks are still failing at an alarming rate. Here's an inside look at what happens when they go under.