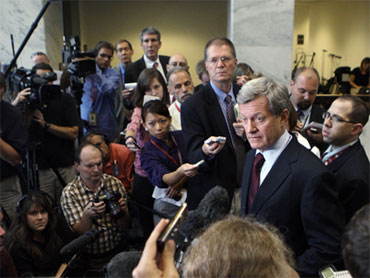 (AP Photo/Haraz N. Ghanbari)
At long last, Sen. Max Baucus has released his health care bill. It's the most moderate health reform legislation Congress has seen and a bill that could reflect the legislation most likely to make it to the president's desk.

It is a long, complex path to that desk, however, filled with procedural hurdles and political landmines that could trip up President Obama's goals at any point.

Baucus first laid out his policy vision (PDF) for health care 10 months ago. More than three months ago, he began dealing in closed-door negotiations with six -- and later just five -- members of the Senate Finance Committee. Now, however, the senator must come face to face with the other 17 members of his committee, some of whom have expressed serious misgivings with his bill.

The Senate Finance Committee will begin its markup session on Tuesday, beginning the arduous process of picking the bill to pieces -- extracting some portions and adding others through countless amendments from both Democrats and Republicans. Some of them will be major: Republican Sen. Chuck Grassley has said he wants to scrap the bill's provision that calls for all Americans to acquire insurance, a central tenet of the Democrats' reform plans. Democratic Sen. Jay Rockefeller wants to attach a provision for a government-run health insurance plan, or "public option."

Committee members must submit their amendments by this Friday. While not all may be quite so significant, there are sure to be many amendments submitted, meaning the group has some long days ahead of it.

By comparison, the Senate Health, Education, Labor and Pensions (HELP) Committee (the other Senate group that created its own health care bill) took a grand total of 54 hours, spanning the course of 13 days, to approve its bill. It was one of the longest legislative mark-up sessions in recent history, according to congressional staff. The committee approved hundreds of amendments, including 161 Republican changes -- but the bill still only passed with Democratic support.

While it may seem impossible for the rhetoric fueling the partisan divide on health care to get any more hyperbolic, the HELP mark-up meetings proved that long meetings can lead to some silly remarks. Republican Sen. Judd Gregg said during the sessions that the committee's health care bill represented what would result from putting "Rube Goldberg, Karl Marx, and Ira Magaziner in a room" together.

"Our current system is a combination of Adam Smith, Darth Vader, and the Bodysnatchers," retorted Democratic Sen. Barbara Mikulski. "So I like our plan better!"

In the House of Representatives, the committee working on climate change legislation had to hire a speed reader to get through its 1,000-page bill, while Republicans offered more than 400 amendments to alter it.

Those are just the challenges that arise from getting a bill out of committee.

After that, Senate Majority Leader Harry Reid will have to somehow combine Baucus' relatively moderate bill with the more liberal HELP bill. The new HELP Chairman, Sen. Tom Harkin, told his constituents last weekend that the bill Congress passes will include a public option. More amendments could be added to the combined bill once it reaches the Senate floor.

Finally, the Senate and the House will have to reach some kind of agreement on the legislation. The House faces its own problems, with dozens of progressive Democrats insisting on a public option now in a face off against moderate Blue Dog Democrats.

Baucus and his colleagues will have to clear all these hurdles in a matter of months to get a bill to the president's desk by the end of the year.