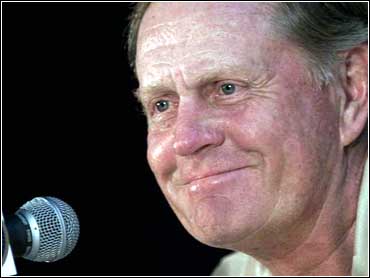 For a few magical moments it seemed like the back nine on a spring Sunday at Augusta National. Jack Nicklaus was making a charge, and the roars sweeping across the fairways carried the news around the course.

Tiger Woods was playing beside him, methodically picking apart Valhalla Golf Club on another steamy summer afternoon. But the loudest cheers were for a 60-year-old just trying to make the cut.

The thousands who lined every fairway and green were hoping against hope for the impossible the one last great round that would allow Nicklaus to play on the weekend in his final PGA Championship.

It was not to be, but Nicklaus gave his fans one last great moment.

Needing an eagle on the last hole to make the cut, Nicklaus hit a high pitch shot to the top tier of the 18th green, then watched as it spun back, missing the hole by only a few inches and stopping 18 inches away.

Woods stood off the green and joined in the clapping, then slapped Nicklaus' hand.

A few moments earlier, the heir apparent to the world's greatest player had lingered back to let Nicklaus approach the green first. Woods was leading the tournament, but seemed almost an afterthought as the fans surrounding the green hooted and hollered in the first of three standing ovations.

The message on the tall white scoreboard expressed their thoughts.

It was a fitting ending to a week that saw Nicklaus mourn the death of his mother, play in his last PGA Championship and symbolically hand off the torch of the world's greatest to his 24-year-old playing partner.

But, ever the competitor to the end, it wasn't the ending that Nicklaus wanted.

"It was a big thrill to be at least respectable, but I didn't want to finish on a Friday," Nicklaus said. "At least I was there. I tried my best."

Early on in his round, it looked like that just might be enough for Nicklaus to finish his final major in a season of final majors differently than he did in the U.S. and British Opens - on the course on the weekend.

With a look of determination that brought back memories of the Nicklaus who won five PGAs and 18 major championships, he put a 5-iron shot within 2 feet on the first hole for birdie, then made a 20-footer for birdie on the second.

When he put his iron just over the pin on the par-3 third hole, the crowd was beside itself in glee and all of a sudden it seemed 30 years had been stripped away from his game.

"It was hard to get my mind on what I was doing (when the tournament began)," Nicklaus said. "But I played the last 31 holes pretty well."

Just when it seemed Nicklaus might go realow, he missed the 12-footer on No. 3. He kept making pars, but iron shots on 12 and 14 that ended up on greenside bunkers and cost him bogeys put him back at even par for the day and 5 over for the tournament on the back nine.

Needing two birdies to make the cut, he missed short birdie putts on 15 and 17. Then he was left with trying to make an eagle on the par-5 finishing hole to make the cut.

"Let's finish it off the way we're supposed to," Woods told Nicklaus on the 18th tee.

Both did, with Nicklaus nearly holing his 72-yard pitch shot and Woods following it by coming out of a buried lie in the front bunker and making a 20-footer for birdie that gave him the outright tournament lead.

Nicklaus broke into a big smile and gave Woods a thumbs up, then calmly made his short putt.

"I think he's a better player than I was," Nicklaus said.

For Woods, whose every move wildly cheered, it was a different experience not to be the center of attention.

"For once, all the cheering was for Jack," he said. "I just kind of quietly shot my round under par and nobody noticed."

Nicklaus, who finished with a 1-under 71 to go with his opening 77, was equally pleased.

"It was pretty nice," he said. "The ones at Pebble Beach and St. Andrews weren't too shabby either. The people were terrific."

And so for one last day was Jack Nicklaus.