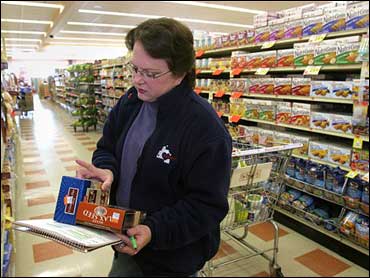 When you go into a grocery store to shop for your family, you may not realize it, but you're playing a game — and what's at stake is your money.

An article in the October issue of Consumer Reports magazine tells how to "Win at the Grocery Game." It gives inside info on supermarkets' tricks of the trade, and how to shop "smarter, cheaper and faster."

The magazine's deputy editorial director, Kim Kleman, spoke about it on The Early Show Friday with co-anchor Rene Syler.

According to the magazine, the average household spends nearly $5,000 a year on groceries.

Consumers have many more choices now regarding where to shop for groceries. In addition to traditional neighborhood stores, there are super-centers such as Costco, BJ's and Wal-Mart, and you can buy online through sites such as Amazon, which has jumped into the business.

Kleman says the strategy of supermarkets is to get customers to spend as much time in the store as possible. So the key to getting the lowest prices is to get what you need and not linger around, because the more time you spend there, the more you're likely to spend.

She stresses there are ways to outfox the store planners.

Shop in a clockwise fashion

Research has shown that most people tend to shop in a counterclockwise direction. Therefore, store planners place products with this in mind.

Staples such as milk and meat are usually in the back of the store, to make sure customers pass other products they may find desirable. Kleman says it's not that stores don't understand their customers' needs: They dounderstand them, and they use it to their advantage.

Weigh the cost of convenience

For instance, it costs less to buy a head of iceberg lettuce and bag of carrots than to buy that produce already shredded. A block of Jarlsberg cheese is cheaper than cheese you get sliced at the store deli.

If you see a sign that says you can buy 10 cans of soup for $10, you can probably buy two cans for $2. The sign is trying to get you to think of buying a larger quantity, but you should buy what you need. Another tactic stores use is to put a cold beverage such as Snapple in a case up front, but you will probably find that it's cheaper on the shelf.

Store-brand products have become really good over the years and are usually cheaper than their brand-name counterparts.

Big packages aren't always more economical than smaller packages of the same product. Kleman says cereal is a good place to look for this; also, tuna, peanut butter, catsup, coffee in a can, and frozen orange juice.

Don't try to find everything at one store

Some stores have better prices on produce, others on meat, for example.

Kleman says superstores are good if you're looking for mayonnaise to feed the neighborhood, but drawbacks include lack of service, only better-known brands being sold for the most part, long lines, and membership fees.

To read portions of the Consumer Reports article, click here.

To read the Consumer Reports piece on grocery shopping at Amazon.com, click here.