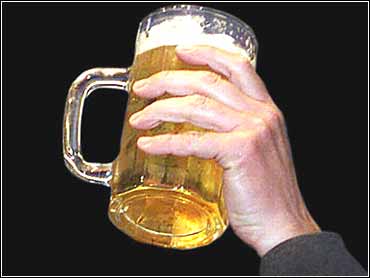 Dubbed "The Old Kingdom Beer," the new old-drink has no froth, a dark tea color and contains 10-percent alcohol, about double the punch of contemporary beers.

"It also has a taste very different from today's beer," Kirin spokesman Takaomi Ishii said. "It tastes a little like white wine."

Another difference is that the ancient Egyptian beer did not use hops, an additive that gives modern beer its bitter taste, Ishii said. But both are based on barley.

Kirin has no plans to sell "The Old Kingdom Beer" commercially. The 30 liters (8 gallons) brewed in the current batch will be presented at an October conference of the Master Brewers Association of America in Texas.

Kirin developed the beer with Sakuji Yoshimura, a noted Egyptologist at Waseda University in Tokyo, using a recipe from 4,400-year-old Egyptian wall paintings. Evidence of beer making in Egypt dates back to the 10th century B.C.

Kirin, which has an alliance with U.S.-based Anheuser Busch, was Japan's best selling beer for 48 years, before losing the top spot to rival Asahi Breweries in 2001.