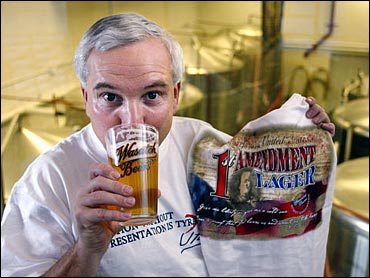 "Tax nukes, not beer!" and "Taxation without representation is tyranny!" were the slogans Thursday as demonstrators gathered at the Great Salt Lake in Utah, pouring beer into the lake to underscore their anger over the state's recent increase in taxes on beer.

Pub owner Greg Schirf, of the Wasatch Brewing Company, and his supporters dressed up in early American costumes to create what they said was their own version of the Boston Tea Party - the 18th century protest by Colonial Americans over British taxes on tea.

The beer tax in Utah is rising from $11 a barrel to $12.80, as a result of a bill passed during the last session of the state legislature.

Schirf argues that it's not fair for the state to try to balance the budget on the backs of a select group of the population.

Supporters of the tax hike see it as a good way to boost revenues for local law enforcement, to pay for efforts to fight drunk driving.

Utah's got plenty of company in looking to beer-drinkers to fatten up the government's bottom line.

With cash tight and bills looming, legislators around the country are turning to neighborhood pubs to help them drown their woes: At least 19 states are either considering plans to boost beer taxes or have already done it.

Pennsylvania Gov. Ed Rendell has proposed one of the heftiest hikes, a plan that would raise the tax on a gallon of beer for the first time since 1947, from 8 cents to a quarter. It would add 14 cents to the cost of an average six-pack and raise $55 million.

The proposal was met with good-natured boos and catcalls when Rendell unveiled it in a speech to the Legislature last month, but he isn't the only one looking to alcohol to close a budget gap.

Idaho is considering raising its per-gallon tax from 15 cents to 24 cents. Nevada Gov. Kenny Guinn wants to temporarily increase the state beer tax from 9 cents to 17 cents per gallon, and Arkansas lawmakers voted to renew a 3 percent tax hike on beer, passed two years ago to aid child education programs.

The proposals have generated loud complaints from brewers who say their products are already heavily taxed.

"For us to eat half a buck a case would be very difficult for us at this stage of the game," said David Casinelli, spokesman for the D.G. Yuengling & Son brewery. "It seems like every time the state needs money, they come to alcohol or tobacco, and, frankly, it's not fair."

Yuengling sells about 850,000 barrels of beer a year in Pennsylvania, Casinelli said. Based on those sales figures, the proposed tax hike would cost the brewer $4.5 million.

Rep. Phil English, R-Pa., who has been fighting for a reduction in the $18-per-barrel federal beer tax, said brewers will simply pass the cost to customers.

"It is typically working families who will use beer, and they are going to be the ones stuck paying this tax," English said. "The governor's rich Philadelphia donors go home and have a scotch. Why shouldn't their taxes be raised?"

At least 23 states have considered raising beer taxes in the past two years, but only a handful of proposals have passed, according to The Beer Institute, an industry lobbying group.

Wyoming lawmakers shot down a proposal to raise their 2-cent beer tax, the lowest in the nation, in January. Ohio rejected an increase in February.

The Center for Science in the Public Interest, a group that has pushed for tax hikes on alcohol nationwide, said it hopes cash-strapped states will soon find beer tax hikes easier to swallow.

"Raising taxes on alcoholic beverages to deal with a budget deficit is a political, economic and public health no-brainer," said George Hacker, director of the center's Alcohol Policies Project. "These taxes generally haven't been raised for years and years. They target primarily heavy drinkers."

A poll this year by the University of Wyoming asked residents of that state what types of taxes lawmakers should raise first, if a tax increase was unavoidable. A vast majority chose cigarettes and alcohol.