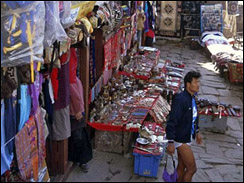 Saints fans at the Superdome, unhappy with a call against New Orleans, threw beer bottles, cups, ice and paper onto the field during Monday night's game.

"God forbid, someone should be hurt by one of these projectiles being thrown," he said.

The interruption by the Saints fans came one day after fans in Cleveland hurled bottles and other debris onto the field because they were angry about a last-minute call that helped the Jaguars beat the Browns 15-10.

On Sunday, the rowdy behavior in Cleveland forced a 30-minute delay in the game with about 48 seconds left.

On Monday, the call was against Saints cornerback Kevin Mathis, who was covering Rams receiver Torry Holt in the end zone. Mathis fell on the play but made contact with Holt in the process.

"Please, this is New Orleans and we are sportsmen here," the stadium announcer said.

The throwing quickly stopped and stadium workers quickly cleared the litter from the field.

In the meantime, Saints coach Jim Haslett stormed the field to protest the call. Another flag was thrown and the Saints bench was assessed half the distance to the goal, but the ball was not moved.

Fans did not throw anything on that call, but loudlchanted an obscenity.

The Rams settled for a 27-yard field goal that boosted their lead to 34-21 with 7:55 remaining in the game.

By Mary Foster
© MMI The Associated Press. All Rights Reserved. This material may not be published, broadcast, rewritten, or redistributed