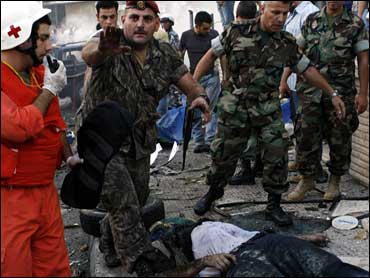 A powerful bomb killed a pro-government, anti-Syrian Parliament member and six others Wednesday in a Christian suburb east of the Lebanese capital, security officials said.

The blast targeted Antoine Ghanem, 64, a member of the right-wing Christian Phalange Party, said the officials, speaking on condition of anonymity because they were not authorized to speak to the press.

The Voice of Lebanon radio station, which is owned by the Phalange party, also confirmed Ghanem's death. The identities of the others killed were not immediately known.

CBS News reporter Edward Yeranian said the car bomb attack was likely part of increasing tensions between the pro-government and pro-Syria factions ahead of an upcoming presidential election in Lebanon.

The attack occurred six days before Parliament was scheduled to meet to elect a new president in a deeply divisive vote. Ghanem is the eighth prominent anti-Syrian figure assassinated since 2005, including three lawmakers from the majority, reducing the ruling party's margin in Parliament.

A local television station, LBC, said 20 people were wounded in the blast, which occurred in the Sin el-Fil district. TV footage showed severe damage in nearby buildings and several cars on fire. The explosion sent a cloud of gray smoke over the area, and blood covered several parts of the street.

The assassination of anti-Syrian figures began with former prime minister Rafik Hariri, who was killed in a massive car bombing that year. Syria's opponents in Lebanon have accused Damascus of being behind the killings, a claim Syria denies.

Hariri's death sparked massive protests that helped bring an end to Syria's nearly 30-year domination of Lebanon. Damascus was forced to withdraw its troops from Lebanon in 2005, and a government led by anti-Syrian politicians was elected.

Since then, the government of U.S.-backed Prime Minister Fuad Saniora has been locked in a power struggle with the opposition, led by Syria's ally Hezbollah. Government supporters have accused Syria of seeking to end Saniora's slim majority in parliament by killing off lawmakers in his coalition.