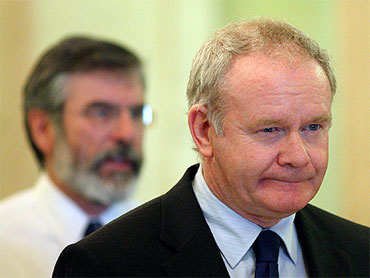 The British and Irish governments launched a mission Monday to save Northern Ireland's unraveling administration, a Catholic-Protestant coalition that the territory's 1998 peace accord intended would promote a lasting new era of nonviolent compromise.

The British and Irish prime ministers, Gordon Brown and Brian Cowen, traveled together to Northern Ireland after reaching the conclusion that their hands-on, immediate involvement would be necessary to stop rival local leaders from pulling the plug on power-sharing.

The major Irish Catholic party, Sinn Fein, is warning it will withdraw from the 2½-year-old coalition - triggering its collapse - unless the British Protestant side stops blocking efforts to transfer control of Northern Ireland's justice system from Britain to local hands.

While Britain and Ireland both back the power handover, the Protestants of the Democratic Unionist Party are blocking the move until Sinn Fein meets other demands.

"There's no doubt that we need to resolve this matter in a way that will ensure that devolution of policing and justice will take place in a specified period," Cowen said at a London news conference alongside Brown. "We believe with goodwill, determination and good faith on all sides that it should be possible to do that. We believe the outstanding issues are resolvable."

Brown said he and the Irish leader would talk to both sides of the Belfast administration and seek a middle ground between their competing demands, including side issues being pursued by both the Democratic Unionists and Sinn Fein.

"I believe that the end product will be that devolution of policing and justice will take place," he said.

The premiers were expected to meet separate delegations at Hillsborough Castle, the British royal residence and frequent negotiation venue southwest of Belfast. It wasn't clear whether an all-party conference bringing all factions together around the same table would be attempted.

Tensions between Sinn Fein and the Democratic Unionists have been steadily rising in recent weeks in expectation of a British general election by mid-2010 - an event overshadowing all political calculations in Northern Ireland. Both sides have adopted tough public positions to reassure their own traditionally hard-line voters.

"I am still determined to make this place work," McGuinness told reporters at Stormont Parliamentary Building in Belfast before the talks. He accused the Democratic Unionists of failing "to deliver and honor their commitments."

Neither McGuinness nor Robinson spoke after their 35-minute meeting, and other senior officials declined to be interviewed. The Democratic Unionists issued a statement blaming Sinn Fein for whipping up an atmosphere of crisis.

"Sinn Fein needs to remove any threat to collapse the Assembly. The community will not tolerate any party that seeks to drag us back to the bad old days," The Democratic Unionist statement said.

Despite the prime ministers' high-profile intervention, a power-sharing breakdown looks more likely than a breakthrough because of the bad blood between the two principal parties and the looming electoral test they both face.

Two men were arrested Monday on suspicion of involvement in the dissidents' latest attack Jan. 8, when a booby-trap bomb detonated under the car of a policeman. The target, a prominent Catholic officer, lost a leg and awoke from a coma only Sunday. Analysts warn that a breakdown in power-sharing could fuel support for the dissidents in Sinn Fein's strongholds.

Both Robinson and McGuinness appear reluctant to compromise too much in advance of the U.K. election, in part because Northern Ireland voters in all recent elections have punished moderate candidates and rewarded the most stubborn negotiators.

Both parties benefited from that trend to overtake moderate rivals over the past decade. Today they hold most of Northern Ireland's seats in the British Parliament as well as in the Northern Ireland Assembly.

This time, the Democratic Unionists also are seeking an alliance with Brown's rival, Conservative Party leader David Cameron, whom polls favor to become Britain's prime minister after the election.

Sinn Fein accuses the Protestants of delaying progress in hope of securing a stronger negotiating position in alliance with a future Conservative government.

Since Sinn Fein and the Democratic Unionists formed an unlikely alliance in May 2007, the two traditional enemies have clashed on many government issues.

The Democratic Unionists have spent more than a year seeking the toughest possible terms with Sinn Fein on how their coalition would oversee the courts, police and other agencies of law and order. Their disagreement means Britain retains power over justice and policing - something Sinn Fein says it cannot support indefinitely.

The Democratic Unionists' latest demand is for the abolition of a decade-old panel, the Parades Commission, that the British government empowered to rule on whether Protestant fraternal groups can march near Catholic areas. Such sectarian confrontations have been at the heart of four decades of bloodshed and continuing tensions in Northern Ireland.

The Parades Commission has greatly restricted the ability of Protestants to parade anywhere near Sinn Fein power bases following widespread rioting in the mid-1990s.