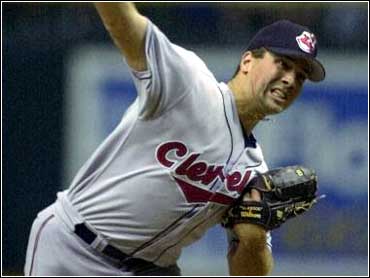 Jason Bere has already made a difference for the Cleveland Indians.

Bere (2-0) has won both his starts since being acquired in a seven-player deal with the Milwaukee Brewers last Friday.

"It's definitely a different type of atmosphere here," Bere said. "I think we know we have a chance to get to the postseason now. As far as trying to fit in and that type of thing, I think the only way to do that is to go out and do your job."

"He did a good job mixing things up and keeping you off-balance. It was a bad timing night," Tampa Bay's Steve Cox said.

In his two starts with Cleveland, Bere has allowed four runs over 15 innings.

"He's stronger," Cleveland manager Charlie Manuel said. "When he pitched against us with Milwaukee earlier in the year, he didn't have the same fastball he's had the past two times out. And he didn't have the command of his breaking ball."

"He might have had an off-night against us, but at the same time his stuff was nowhere near as good as it has been the last two times I've seen him."

Russ Johnson, who went 3-for-4, homered in the sixth for Tampa Bay's run. He had half of the Devil Rays' hit.

"When you get a good game pitched against you, you're going to tend to look flat," Tampa Bay manager Larry Rothschild said. "I don't think we came out flat, I just think he threw a good ballgame. He kept us off-balance all night, especially with the off-speed pitch."

In two previous starts against Tampa Bay coming in 1998 while with the Chicago White Sox Bere gave up nine earned runs over 9 2-3 innings.

Bob Wickman, acquired from the Brewers with Bere, got the final three outs for the Indians.

"I think they got us to fill some needs, but it's up to us to go out when we get the opportunity to do what we're capable of doing," Bere said.

Sandy Alomar hit his fifth home run of the season, a solo shot in the ninth.

"He had a pretty awesome changeup with some sinking action," Alomar said of Bere's performance. "He was down in the zone most of the night and he was painting the outside corner with his fastball."

Indians shortstop Omar Vizquel left after batting in the seventh inning because of flu-like symptoms.

"Vizquel got a little dizzy," Manuel said. "I had to take him out of the game. He should be OK. He just felt sick."

Albie Lopez (8-8) went seven innings and gave up four runs and eight hits. He struck out seven, with six coming in the first three innings.

"They got guys on base and got some key hits," said Lopez, who had some mild calf cramps during his final inning.

Lopez has worked at least seven innings in five consecutive starts and lowered his ERA to 3.83.

The Indians took a 2-0 lead in the second on Travis Fryman's run-scoring single and Kenny Lofton's RBI grounder.

Cleveland made it 4-0 in the fourth. Alomar had an RBI infield single with the bases-loaded and another run scored when Lofton hit into a double play.