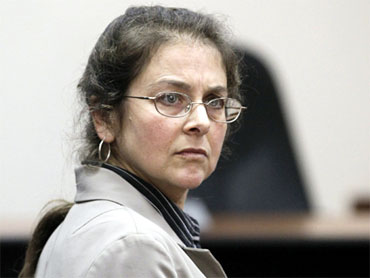 An American activist convicted of aiding leftist rebels has turned herself in to police after a court ordered her arrest and struck down a decision granting her parole.

Lori Berenson's husband and lawyer, Anibal Apari, said she had turned herself in to police on Wednesday after the decision by a criminal appeals court was announced.

A court in Peru revoked parole for American activist Berenson and ordered that she be arrested Wednesday and sent back to prison to finish the last five years of her 20-year prison sentence for aiding leftist rebels.

Deputy Justice Minister Luis Marill said Berenson should be detained in the coming hours. Marill said the court overturned a May ruling granting Berenson parole that was widely unpopular in Peru.

The court "has ordered the capture of U.S. citizen Lori Berenson and her immediate imprisonment," Marill said.

The ruling by the three-judge panel of the criminal appeals court may not be appealed under Peruvian law.

The court's decision was announced two days after the 40-year-old New Yorker appeared at a hearing, apologizing for her crime and asking the court to uphold her parole.

Berenson has acknowledged collaborating with the Tupac Amaru Revolutionary Movement, but said she was never a member of the group nor involved in violent acts.

She told the court on Monday that she regrets her actions and hoped to focus on raising on her 15-month-old son, Salvador. Peruvian authorities have said that if parole were revoked, she would be required to return to prison with her son.

There was no immediate reaction from Berenson or her family. Journalists gathered outside her Lima home after the decision was announced. Her parents, from New York City, have been in Peru in recent days.

Berenson was initially accused of being a leader of the Tupac Amaru, which bombed banks and kidnapped and killed civilians in the 1980s and 1990s.

When she was arrested in November 1995 with the wife of the group's leader, prosecutors said Berenson was helping plot a takeover of Peru's Congress.

She was convicted of treason by a military court in 1996 and sentenced to life. But after an intense campaign by her parents and pressure from the U.S. government, she was retried in a civilian court. In 2001 it convicted her of the lesser crime of terrorist collaboration and sentenced her to 20 years.

Julio Galindo, the government's lead anti-terrorism prosecutor, argued Berenson should be returned to prison and raised doubts about whether she has cut all links to the rebel group.

The court accepted Galindo's arguments that there were errors in the May 27 ruling that granted parole - including that her time served in prison was incorrectly calculated - and in Berenson's failure to promptly notify of the police of the address where she was living upon her release.

Many Peruvians disapproved of Berenson's release, and congressmen of multiple parties praised the ruling to send her back behind bars.

"I think we shouldn't give a single millimeter to terrorism," said lawmaker Carlos Raffo, who belongs to the party of former President Alberto Fujimori, during whose government Berenson was prosecuted and imprisoned.