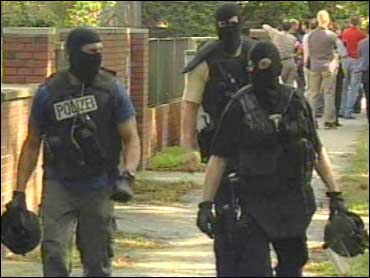 German police special forces ended a hostage situation which had lasted about five hours by storming the Iraqi Embassy in Berlin, taking five hostage-takers into custody and freeing all the captives, a spokeswoman said.

"At 7:40 p.m. the building was entered and five people were arrested. Two were injured but only lightly," police spokeswoman Christine Rother told reporters at the scene. No further details were immediately available.

The hostage-takers did not resist arrest, she said.

The suspects took four people hostage, including acting ambassador Shamil Mohammed. Two were released during the ordeal - one who suffered eye irritation when the hostage-takers used pepper spray and a second who went into shock. The other two were released when police stormed the building. It was not clear if Mohammed was in the embassy until the end.

A group calling itself the Democratic Iraqi Opposition of Germany said it carried out the embassy take-over to press for the overthrow of Iraqi leader Saddam Hussein.

The White House said the U.S. had nothing to do with the takeover and had no prior knowledge of or contact with the group responsible.

The street around the embassy, located in the leafy suburb of Zehlendorf, had been sealed off by dozens of police, some wearing bulletproof vests.

"Iraqi opposition members tried to force their way into the embassy and then there were shots from the embassy," a police spokesman said.

The group's statement, written in nearly flawless German, said the embassy occupation was designed to "make the German people, its organization and political forces aware that our people has the will to freedom and will put it into practice."

"In the name of the Iraqi people and their legitimate leadership, the Iraqi opposition, we declare that the liberation of Iraqi soil begins today. We are taking over the Iraqi Embassy in Berlin and with this the first step in the liberation of our beloved fatherland," the group said in a statement.

The statement, which appeared to have been sent by fax from the town of Hamburg, listed contact details at the bottom of the page, which included the number of the Iraqi Embassy in Berlin.

Iraq's ambassador to the United Nations said that "this is the first time we have heard about this (group's) name."

"Certainly they have been pushed by somebody else, some government perhaps," Mohammad Al-Douri told reporters in New York. "We don't know. But it seems like that."

The Iraqi National Congress, the country's main opposition group in exile, condemned Tuesday's occupation by what it called an obscure organization not representing the opposition.

"We confine our war of liberation to Iraq proper," a spokesman said in London for the Iraqi National Congress, which includes at least six main factions of the Iraqi opposition.

"We are trying to get more information on these people. We do not condone such violence," the spokesman said.

The embassy incident came as Germany has come out strongly against any U.S. military action against Iraq to remove Saddam, who is accused of trying to develop weapons of mass destruction.

Chancellor Gerhard Schroeder has ruled out Germany sending troops for an "adventure" in Iraq that he said could wreck the international anti-terror coalition and spark turmoil across the Middle East. Other key U.S. allies in Europe have expressed growing opposition as Washington debates action against Baghdad.

In remarks published Tuesday, U.S. Ambassador Daniel Coats criticized Schroeder for the comments. He said he told Shroeder's aides during a meeting at the Berlin chancellory that the German leader's stand was "not appropriate."