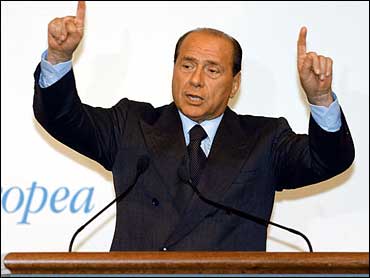 Premier Silvio Berlusconi insisted Friday he had never apologized to Germany, saying he had merely said he was sorry that his "joke" likening a German lawmaker to a Nazi prison guard had been misunderstood.

At a news conference after hosting his first European Commission meeting, Berlusconi stressed that he was the one who had been offended by an exchange Wednesday in the European Parliament with German lawmaker Martin Schulz.

"I have not made any apology as far as the case of the German lawmaker is concerned," Berlusconi said in response to a question about the incident. "On the contrary, I have underlined strongly that I felt offended for the grave words that had been directed not only toward me but toward my country."

"I have added that if anybody interpreted what was meant as an ironic joke as damage to a deep feeling of a country, I was very sorry," he continued. "But I have not apologized."

Germany had declared its spat with Italy over after Chancellor Gerhard Schoeder spoke by phone on Thursday with Berlusconi. German officials said Berlusconi had apologized.

"For us, the matter is closed with the apology," German Foreign Minister Joschka Fischer said in Brussels on Friday. "'What we want is a successful Italian presidency in the interests of Europe."

"This was generally viewed as an apology and I think rightly so, and everything else is a semantic consideration that I won't get involved in," Anda said.

Berlusconi was also asked if he would apologize to the European Parliament, as has been suggested by the body's conservative vice president, and indicated he would not.

"As far as the European Parliament is concerned, the situation is the same," Berlusconi said.

Berlusconi said he had expressed "profound appreciation, profound respect" for the European Parliament, but said he had been offended as its guest.

"I'm sorry if this might have hurt the sensibility of somebody, but these sensibilities cannot be one way," he said.

The incident began Wednesday when Schulz asked Berlusconi about recent laws that the premier's critics say help him skirt around his legal problems. Berlusconi fired back saying Schulz would make a "perfect" Nazi prison guard in a film.

On Friday, Schulz called on Berlusconi to apologize to the European Parliament, but said he had no intention of apologizing for his own comments that prompted the outburst.

David Harley, spokesman for European President Pat Cox, said Berlusconi should provide "clarification of those comments directly to the parliament" so the EU can move beyond the dispute.

The conservative vice president of the parliament, Ingo Friedrich, made a similar appeal, saying "a clash between prima donnas must not endanger our ability to work at European level."

He said there was a risk that the Italian EU presidency "will become a flop" unless Berlusconi makes a move.

The gaffe continued to make headlines across Europe on Friday, with the Berliner Zeitung writing that while the diplomatic row might be over, consequences remained.

"It not only strengthens European partners' reservations against the EU president, but also confirms Berlusconi in his own prejudices. He never expected good things of Europe — the near-slavish attachment to the U.S. president can be explained partly by his rejection by his European neighbors."

"The offense that the premier made to Schulz, to Germany and Europe, has been repaired only in form, not substance," the newspaper wrote. "Italy starts its turn as EU president with a handicap that cannot be canceled."

Britain's Financial Times said the incident shows the dangers of Berlusconi's control over the Italian media, noting that state-run RAI television had omitted reporting on the gaffe Wednesday afternoon and only paraphrased what the premier had said in its Wednesday evening broadcast.

"He lives in a media bubble where his public gaffes and gratuitous insults go largely unreported at home — at least until he goes abroad," it wrote.

The Wall Street Journal came to Berlusconi's defense, saying no European leader should have expected such an attack.

"We wish Mr. Berlusconi had found a defter comeback than the rough one he offered — not least because at a time when he is in a position to put forth his vision for Italy and Europe, he has once again seemed to hand his opponents a loaded gun to use against him," it said.

Berlusconi is Italy's richest man, presiding over a US$7.8 billion media empire that includes the nation's largest private broadcaster, Mediaset. Combined with state-run RAI, he controls about 90 percent of the television market in Italy, leading critics to charge he uses his influence over information to benefit his political and personal interests.

Berlusconi complains he is the victim of leftist opponents.