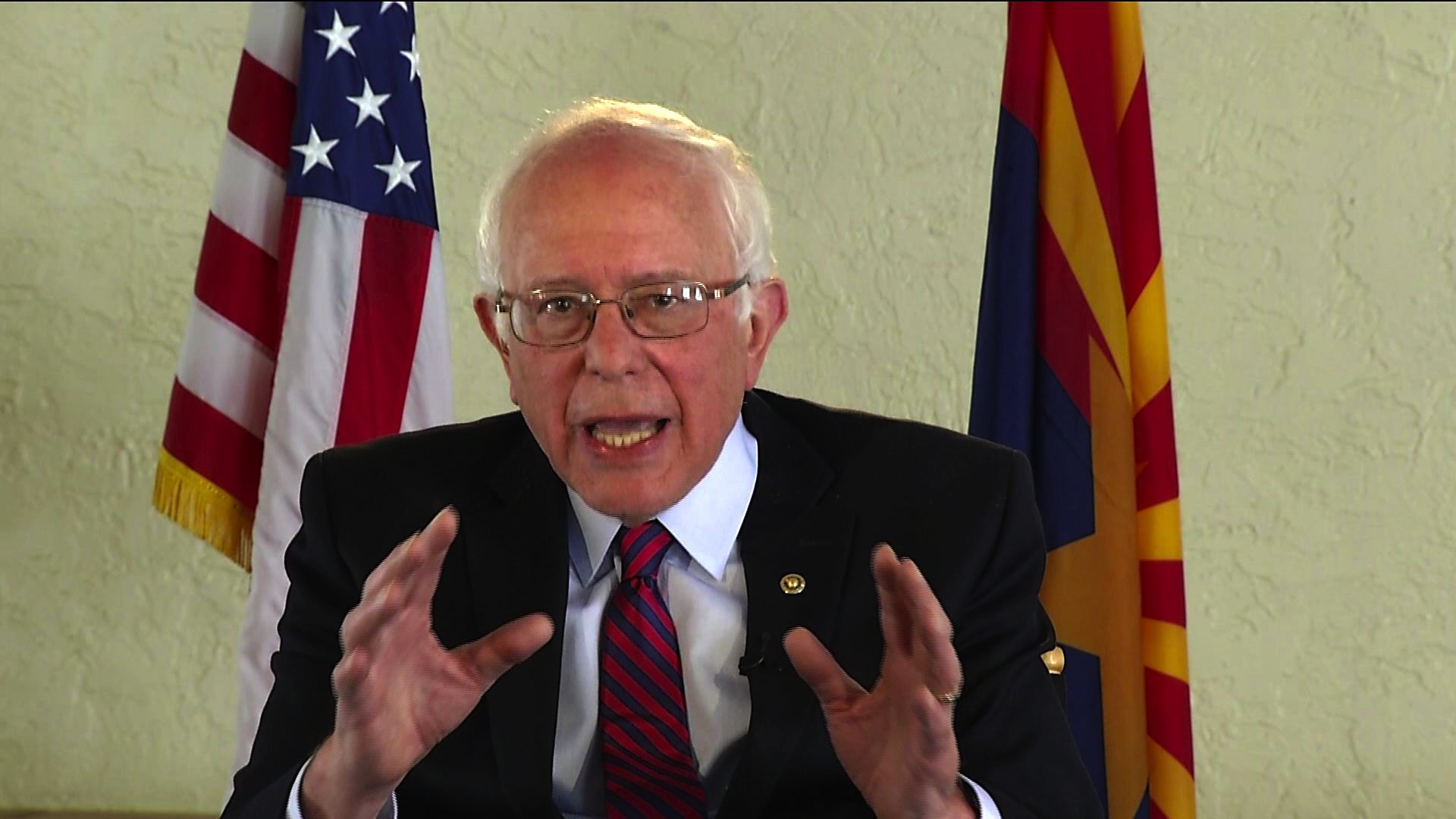 On Tuesday, Bernie Sanders called ISIS' terrorist attacks in Brussels a "cowardly attempt to terrorize innocent civilians" -- but in a decidedly less-bellicose tone than the other presidential candidates.

Hillary Clinton used more assertive language: "the people of Brussels, of Europe and of the world will not be intimidated by these vicious killers," she said in a statement. Donald Trump's reaction went further, warning that the Brussels attack is "just the beginning" and that things "will get worse and worse."

But in contrast to other candidates, particularly on the Republican side, Sanders praised the U.S. government's ongoing efforts to defeat the terror group.

"We have always been at risk," Sanders said on Tuesday afternoon when asked if the US is at greater risk now than it was before the Belgium attack. "I know that our intelligence agencies, our law enforcement people will be as vigilant as they can to protect our country." Ted Cruz, meanwhile, called the same day for increased surveillance of "Muslim neighborhoods."

Sanders' remarks came one day after a major foreign policy speech by the candidate that likewise took a much more dovish stance than his opponents on conflicts in the Middle East.

In that Monday speech, which was delivered in a high school in Salt Lake City, Sanders reiterated his stance that Muslim nations must create a coalition to fight ISIS. The Democrat said he believes the U.S. must continue to fight ISIS as part of "an international coalition to destroy this barbaric organization," but ultimately believes that Middle Eastern nations must take the lead.

"Keep in mind that while ISIS is an obviously a very dangerous and formidable enemy ISIS has only about 30,000 fighters on the ground," Sanders said. "So when we ask the nations in the region to stand up. Nations in the region, which have millions of men and women under arms. We know it is surely within their capability to destroy ISIS."

Sanders also stood out from his presidential opponents for his approach to the Israeli-Palestinian conflict.

During a speech that night at the pro-Israel AIPAC conference, which Sanders was the only candidate to skip, Clinton said she would take US-Israel "alliance to the next level," a sentiment echoed by Republican presidential contenders. Cruz asserted that if he were president "stand unapologetically with the nation of Israel."

Sanders, meanwhile, was more reserved is his appraisal of the Jewish State and its relations with its neighbors, saying that while he would work "tirelessly to advance the cause of peace as a partner and as a friend to Israel" it was important to reach out to both sides of the conflict.

"To be successful, we have also got to be a friend not only to Israel, but to the Palestinian people," Sanders said, noting the devastating unemployment rate and level of poverty in the Palestinian territories.

Sanders went on to criticize both the Israeli Prime Minister, Benjamin Netanyahu, and Palestinian President Mahmoud Abbas for contributing to the ongoing turmoil in the region. He called it "absurd" for the Netanyahu government to build more settlements in the light of recent violence in the region and came down on Hamas for shoveling funds into building tunnels known to enable attacks on Israel from the ground.

Noting that he once lived on a Kibbutz, Sanders asserted that he is the only presidential candidate with a "personal connection" to Israel. Yet he did not explicitly mention that he is also the only Jewish candidate.

Sanders also expressed his support for the Iran nuclear deal, which was roundly knocked by each of the the Republican candidates at the Tuesday conference. He opposes those who believe that rejecting to the deal as the "pro-Israel" stance.

On each front, Sanders towed a line very close to that of the Obama administration. He commended the president and Sec. John Kerry for their attempts to end the war in Syria, and posited that the ceasefire in the country shows the promise of American-led diplomacy.

Sanders also emphasized the need for increased information sharing with allies, and summed up his foreign remarks by highlighting the opportunity the U.S. has to "bring people together" with an agenda aimed at mobilize international coalitions.In contrasting himself with Clinton on foreign policy, Sanders often condemns her support of overthrowing Muammar Gaddafi in Libya.

"We look at foreign policy in very different ways," Sanders said of Clinton during an interview with CNN.

But comparing and contrasting the stances of two Democratic presidential contenders on ISIS will be made easier on Wednesday when Clinton delivers a foreign policy speech. She is expected to emphasize "steady leadership" needed to defeat ISIS.