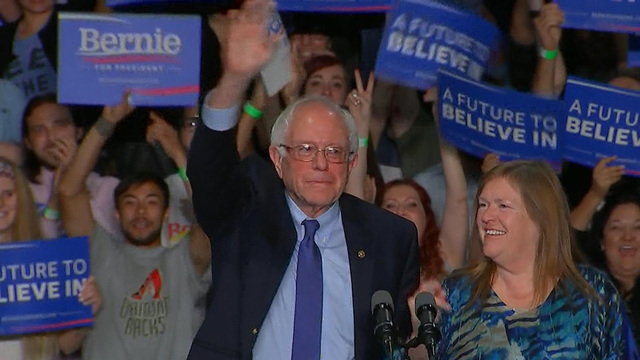 FLAGSTAFF, AZ -- At a rally here Thursday night, Bernie Sanders took aim at one of Donald Trump's most prominent supporters.

"It's easy for bullies like Sheriff Arpaio to pick on people who have no power," Sanders said of Maricopa County's controversial Sheriff Joe Arpaio, a Trump backer the billionaire frequently references in his stump speech. "If I am elected president, the president of the United States does have power. So watch out, Joe."

Twelve-year-old Katherine Bueno introduced Sanders with tears in her eyes. She told the story of watching the TV as her father was deported and said that those images come back to her everyday.

"I want all deportations to stop," she said. "That is why we need Bernie Sanders to be our President."

Sanders, who described Arpaio as "un-American and uncivilized," said that the Sheriff need to stop picking on Katherine and other children.

"I think that was extremely appropriate," said 62-year-old Stan Clark of Flagstaff, on Sanders going after Arpaio. "He has been engaged in essentially what is illegal behavior and getting away with it."

Last week his wife, Jane Sanders, visited a tent city in Phoenix where Sanders said that she was "ambushed" by Arpaio. He was referring to a trip that Jane took to the tent cities last week when Arpaio showed up, apparently unplanned, and offered her a tour. She had tweeted about the run-in.

"My wife is a tough lady and she does not take ambushes easily," Sanders said, adding that when she asked him questions he could not answer.

Sanders frequently talks about the need to create a path towards citizenship - at Thursday's event he reiterated that point twice. This is a very important issue in Arizona as nearly half of all illegal border crossings into the U.S. occur along the the state's border with Mexico. Latinos also accounted of more than 15% of the voting population in the state's 2008 presidential Democratic primary.

After losing five primaries earlier this week, this was the first time that Sanders publicly talked about his pathway forward. In describing the "climate" of the west as "a little friendlier" to his campaign, Sanders noted that Utah, Idaho, Washington and Oregon state all states that will help him secure a path toward victory.

Winning, as he always mentions, will depend on high turnout. He argued that his ability to clinch the Democratic nomination is hinged upon the fact that the West, which holds a number of primary contests in coming weeks, is "friendlier" to his campaign.

The New York Times reported that Obama told a fundraiser in Austin that it was important to get behind one nominee and insinuated that that the Sanders campaign is close to an end. Sanders has pushed back on that idea.

"To suggest that we don't fight this out to the end would be, I think, a very bad mistake. People want to become engaged in the political process by having a vigorous primary and caucus process," Sanders said on MSNBC.